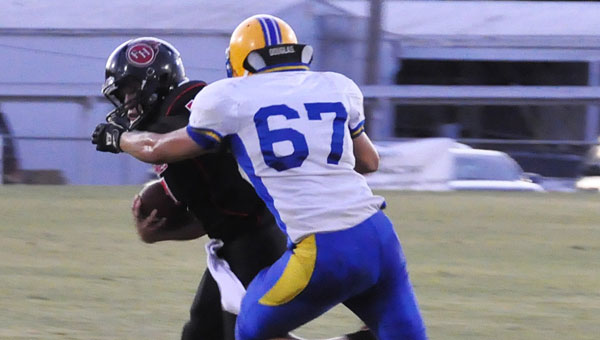 The 360 rushing yards came on 43 carries, giving the Eagles an average of 8 yards per carry.

“It was an awesome game tonight,” said Hope head coach Mark Rettig. “Consistently tonight, these guys showed a lot more intensity than I’ve ever seen from this group.”

Senior Andrew Whitson scored early in the second quarter on a 5-yard rushing touchdown, and Spence ran in the 2-point conversion.

Spence then connected with Timothy Bell on a 22-yard touchdown pass, and Whitson added the 2-point conversion.

The Flames scored again before the half, bringing the game to 24-12 at halftime.

The fourth quarter also saw three Eagle touchdowns: One on a Nafe 4-yard run, the next on a Reid Allen 56-yard interception return and the third on a 7-yard Nafe run.

“I think Flint Hill is one of the better teams we’ve played so far this year,” Rettig said. “Our line did an excellent job tonight. I’m proud of all the guys tonight.”