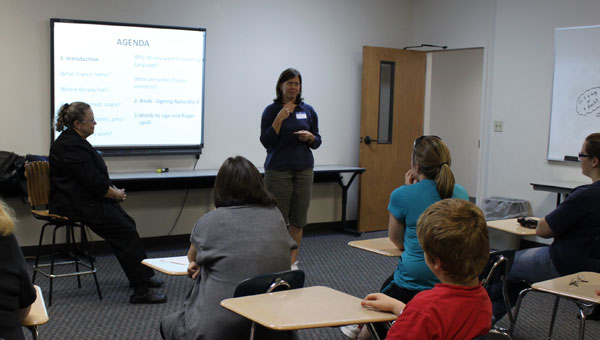 Laura Rhodes stands before her classmates and signs her name, workplace and any concerns she has about learning sign language. Teacher Cherybe Thornton and the rest of the class translates the signs aloud. (Reporter photo/Christine Boatwright)

The members of the intermediate sign language class at Southeastern Bible College each had different reasons for taking the class.

“I want to learn sign language to help people learn about God,” Kathy Bahlmann signed to her classmates.

Merrill Garner wanted to learn sign language to be able to communicate with her deaf brother and sister-in-law in California, as her family is “not a signing family,” she said.

Other class members wanted to learn how to sign to minister to the deaf people in their church congregations or speak to their students at school.

Cherybe Thornton teaches the class at the Bible college and was raised by deaf parents. Until she was 3 years old, all the adults in her life were deaf. As she taught the class, her hands flew as she signed each word she spoke.

Thornton said she has had people learn sign language for a multitude of reasons.

“I had a husband and wife who took the class together so when they were scuba diving they could sign when there was a shark,” she said.

“Growing up, my faith was always strong. I had a lot of freedom, which could have been a bad thing,” Thornton said. “At 14, I accepted the Lord. I’ve been interpreting since I was 3, and at 5, I remember going with my dad (to interpret) because we lost my brother.”

Thornton said she was “one of the blessed ones who was always the Lord’s,” and she said the Lord made deaf people the way they were for a reason.

“The Lord made them that way, and he doesn’t make mistakes,” she said. “Deaf people are so wonderful. They’re a great culture group. They will just give and give to you.”