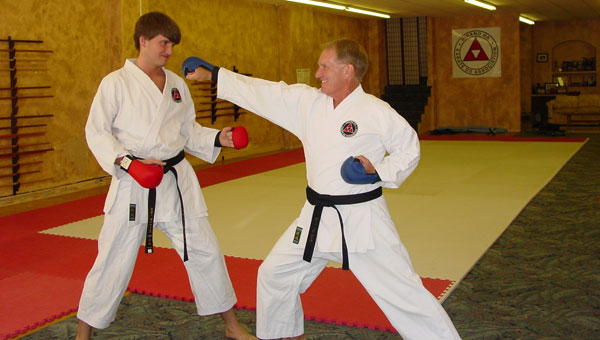 Eddie Davis and his father, Ed, enjoy practicing the skill of karate together. (Contributed)

Ed Davis and his son, Eddie, wanted to do something together that was both fun and physical, so three years ago, they began a karate class. The sport fit their objective because, as Ed described it, it is an enjoyable physical and artistic expression of self-defense.

They never dreamed that they would someday become national champions. Their immediate goal was only to attain the black belt status, but then they decided to participate in the 2010 USA Japan International Karate Federation Nationals competition in Greenville, S. C. Ed came away with the win in the 55-and-older novice division and Eddie won the 17-year-old novice division both for kumite (sparring). The first-degree black belts later earned by the two, reflect the accomplishing of eight different belts beginning with the white belt, and involve 400-500 hours of training. Both father and son plan to work for the next of the 10 degrees of the black belt. The 10th degree means “perfection.”The Davises join three other black belt families at Karate Do in Montevallo: Fred Brantley and son, Zack; Eva Cross, and two children, Faith and Thomas; and Frances Pope with her father, David, and grandfather, Buddy Freeman.

“Eighty-year-old Buddy Freeman has a terrific impact on this program,” said Pope, operator of Karate Do. “He is a real inspiration to the younger practitioners, and he travels with me and participates in lots of tournaments and exhibitions.”

The very active Freeman, who is a third-degree black belt, seems to support the theory that karate is good for one’s health. Ed Davis agrees as he volunteers that when he was six months into the program he had lost 52 lbs., corrected his diet and felt wonderful. “I trained hard,” he said with a grin, “and I didn’t have, not even one, hamburger or French fry for a whole year.”

Pope explained that about 25–30 percent of those who participate in the Karate program at his institution are adults, and that number is increasing. In view of the increased enrollment, he will also offer tai chi, a gentler form of a martial art, this year.

Ed and Eddie Davis plan to add the tai chi to their practice although they both lead very busy lives. Ed is the golf professional at the Montevallo Golf Club and Eddie has just begun his first year at the University of Montevallo, but they will continue with their karate program because they love the sport and they enjoy being together.

For information about the karate and tai chi classes, contact Pope at 665-1992.