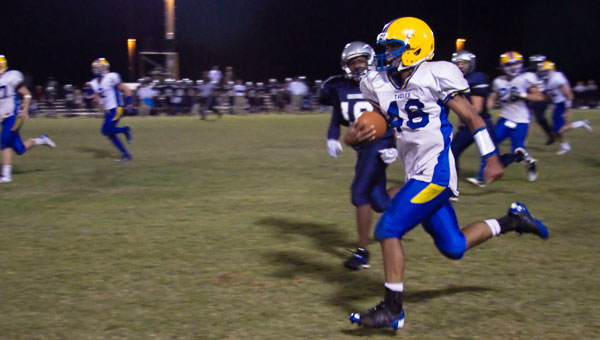 The Hope Christian Eagles improved to 5-1 on the season Sept. 23 as they rolled over North River 62-20.

“We played our best game of the year tonight,” said Hope head coach Mark Rettig. “They know what is expected of them, and they are doing a good job of playing up to those expectations.”

Hope scored in the first quarter on a 5-yard run by Andrew Whitson, who also added the 2-point conversion.

After North River tied it up, Hope responded with three touchdowns in the second quarter: One on a 7-yard rush by Eric Spence, another when Josh Clevenger recovered a Hope fumble in the endzone, and the third on a 12-yard Spence run. Spence added the 2-point conversions on the first two touchdowns of the second quarter, and Charles Streets added the third.

North River also scored in the second quarter, bringing the game to 32-14 at halftime.

After North River scored to start the second half, Hope scored again in the third quarter on a 21-yard pass from Spence to Whitson, giving the Eagles a 38-20 lead.

The fourth quarter brought three Hope touchdowns: One on a 11-yard Charles Streets run, one on a 13-yard Spence-to-Reid Allen pass and the third on a 50-yard Streets-to-Spence touchdown pass.

Spence connected with Whitson for the 2-point conversion on the first touchdown of the fourth quarter, Spence added the second conversion and Ben Nafe added the third.

“Those are the biggest boys we’ve played all year,” Rettig said. “Our guys did a good job.”

The Eagles racked up 518 total yards during the game, and Spence completed nine of 14 passing attempts for 192 yards. Spence also rushed for 180 yards on 19 carries.

FROM STAFF REPORTS Oak Mountain High School fell on the road at Northridge 22-7 in a non-region game Sept. 23.... read more