COLUMBIANA – It was a long drive, but Barbara Walton Cutler said she wouldn’t have missed it for the world.

After the Wildcats’ 44-14 football win against Moody, a reception for all SCHS alumni was held across the street at the recreation building.

As she looked around the recreation center, she recalled square dancing in the building as a junior with school principal Woodrow Elliott during a school function.

Cutler met her husband, William, through a mutual friend, Pete Goodwin. Goodwin, a Columbiana native, was stationed with William at Eglin Air Force Base. Goodwin introduced William to his future wife during a visit to Columbiana.

“I’m going to marry that girl by the first of January,” William Cutler recalled telling Goodwin in September 1951. “He said, ‘you’ll never do it.’”

Barbara and William Cutler married Jan. 4, 1952. They have a daughter, three grandchildren and four great-grandchildren.

Sitting next to Cutler at the reception was her brother, Emery Walton. 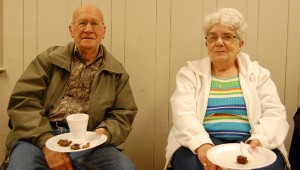 A 1949 graduate, Walton was by all accounts the oldest person in the room. He worked for 50 years in Indiana and Florida before moving back to Columbiana eight years ago. He attended the reunion with his wife, Llewellyn, a 1958 graduate.

Though open to all alumni, the class of 1961 received special recognition in honor of its 50-year reunion. The class sat together during the football game, attended by Gov. Robert Bentley, also a 1961 graduate.

“It feels good to be here,” Johnny Schrader, class of 1961, said during the reception. “I haven’t seen a lot of these people in a long time.”

Bentley didn’t attend the reception because of prior obligations.

Harwell, a 1961 graduate, served as senior class secretary the year Bentley was student council president. She worked as a volunteer during Bentley’s gubernatorial campaign.

“I always knew he was a genuine person, and that was just reinforced during the campaign,” Harwell said.

She remembered Bentley as “rather quite” and “very studious” as a student.

“Through the years I had heard that he always wanted to get into politics,” Harwell said. “I was not surprised when he decided to run.”

Mike Dorough, chairman of the 1961 reunion committee and personal friend of Bentley, said he wished the governor could have made the reception, “but he’s got a busier schedule than we do.”

“He’s still a Columbiana-type person,” Dorough added. “He’s easy to get along with (and) sensible.”

Bentley hosted the class of 1961 reunion at the governor’s mansion in Montgomery last May.

“He mentioned tonight he wanted to do it again in five years,” Dorough said.