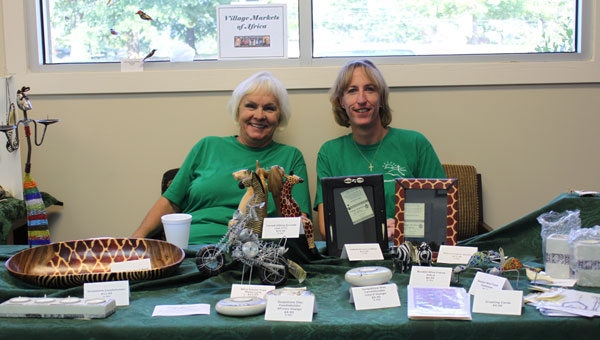 Susan Pritchett, the chairperson for the market committee, grew up in Brazil and Peru, so the idea of fair trade is familiar to her.

“Everything has more character than just coming out of the mold,” she said. “Folks in other countries come into co-ops so people don’t take out more cuts.”

In addition to fair trade items, the church’s handbell choir sold handmade wooden nativity and Lenten scenes as a fundraiser for the choir. Bill Moats and his friend, Bart Jones, worked to create eight sets, but sold four during the market and had orders for 15 more.

The market sold coffees, jewelry, home décor and Christmas ornaments. The goods came through SERRV and Village Markets of Africa organizations. In addition to providing funds to the producers, a percentage of the profits will be donated to Three Hots and A Cot, a nonprofit organization that helps homeless veterans.

“Local artisans normally get 10 to 20 percent, but this way, they get closer to 40 or 50 percent,” Sue Collins said. “The church isn’t getting anything from this.”