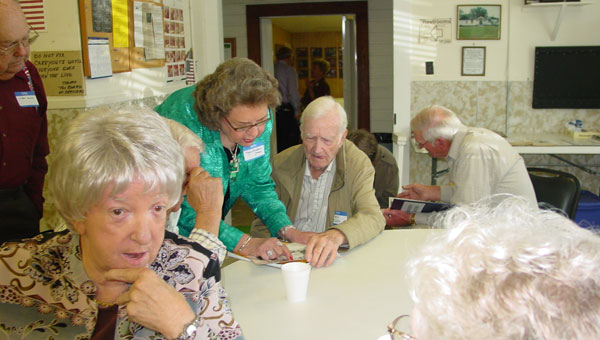 Folks who spent their childhood in Boothton share memories as they discover pictures in an old album. From left facing camera, Sylvia Lee, Myra Linholm Jacks and Pete Blake. (Contributed)

A drive along Highway 10 about three miles past Pearidge toward the Cahaba River reveals almost nothing of the once thriving community that was there some 60 years ago. The area is all covered with beautiful pine trees, and, in the spring, the only evidence may be a few daffodils that have popped up in what might have been the front yard of a coal miner’s family home.

The little town of Boothton may be gone, but the memories were found alive and lively as 34 folks who had lived there gathered for the 60th Boothton reunion on Oct. 2 at the Pearidge Senior Center. The 60 years just melted away as old friendships were rekindled and favorite memories shared.

According to the “Heritage of Shelby County” published by Heritage Publishing Consultants, Boothton was a company-owned coal mining camp; began in 1915, and during peak operations employed about 500 workers. At one time, Boothton (Southern Coal and Coke) had the largest payroll in Shelby County. In 1928, the miners were paid about $1.25 a day. The company thrived for 35 years, but was closed in 1950, and the buildings were razed.

The description is factual, but does not do justice to the community; a close-knit community with people who loved and depended on each other. Most of those who regularly attend the reunions spent their childhoods in Boothton and fondly remember their school days.

“It was a life of just fun, fun, fun,” said Frances Lippeatt Harrell.

The reunions began the year after the mines closed, and some have attended most every one.

At times, especially in the earlier years, more than 350 people came, and though the numbers now are smaller, the friendships and the enthusiasm remain. This year they came from as far away as Tennessee and Mississippi, bearing casseroles, fried chicken, coconut cake, sliced ham and dressing.

Jimmie Yessick Sims of Maylene, who has, for the last few years coordinated the reunion, said, “I am so pleased to see so many here; it’s one way to keep in touch with people you remember and love; and it’s such an enjoyable time.”

Glenice Seagle Smitherman maintains several large albums filled with Boothton pictures and memories. She intends to eventually donate those to the Shelby County Historical Society so that Boothton will be remembered for its contribution to the history of the county.

Accelerated Physical Therapy Inc. has four clinics in the area, including one in Pelham and Chelsea. (Contributed) By SHELBA NIVENS... read more