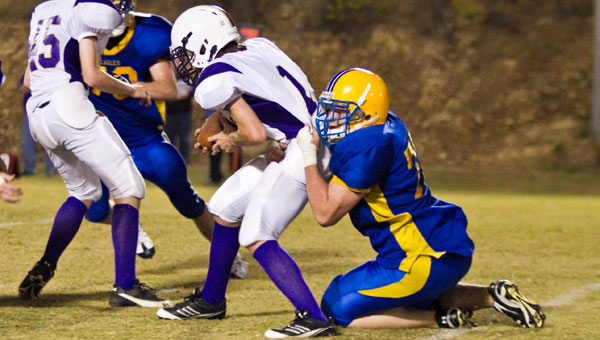 “It went real well for us,” said Hope head coach Mark Rettig. “It was definitely a different team on the field this week than it was last week.”

The Eagles racked up a total of 328 yards on the night, all of which were rushing,

Hope jumped to a 30-0 lead in the first quarter on four touchdowns.

The first came on a 16-yard run by Nafe, the second on an 8-yard run by Bell, the third on an Eric Spence 23-yard run and the fourth on a 37-yard run by Whitson. Charles Streets added two-point conversions on the first two touchdowns, and Spence added the third conversion.

The Eagles added three more touchdowns in the second quarter: One on a 10-yard Streets run, the second on a 15-yard Thompson run and the third on a 1-yard Whitson run. Bell, Streets and Nafe added the two-point conversions.

Nafe also scored in the third quarter on a 6-yard run, and Thompson added the two-point conversion.

Hope’s final score came in the fourth quarter on a 29-yard punt return by Spence.