Breaking away from sexual trauma 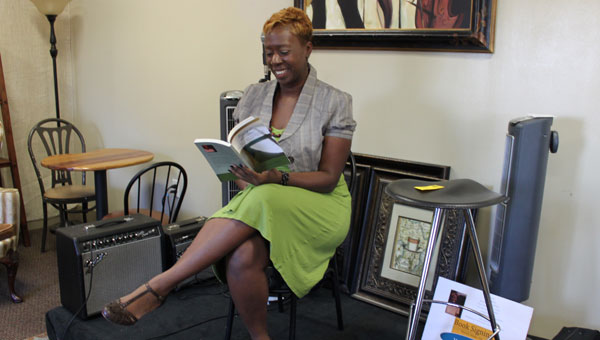 Kamenka Belton reads from her new book at her book signing at Ekklesia Coffee House in Chelsea on Oct. 20. (Reporter photo/Christine Boatwright)

Calera resident Belton highlights three elements in her book. In regards to sexual trauma, “God is aware, he has a response and he has a solution,” Belton said.

“People are so affected by it. It’s widespread; it’s like a cancer,” she said of sexual trauma. “Part of the problem is that it’s a sensitive topic, so it’s not being talked about. People are hungry to talk about it.”

As a child, Belton was sexually abused by her father, and in college, she had her “first and last date” with a man who assaulted her.

“It affects everything,” she said. “That was a time where I was supposed to have lifelong friends and a degree, but it was lost to shame and mostly fear. I left college because of that, and I couldn’t talk to anyone about it.”

In 2001, after a series of bad decisions, Belton found herself homeless, friendless and unemployed. At that time, however, a woman invited her to church.

During an altar call, Belton had an “overwhelming sense of something breaking” from her body.

“Christ started the process of teaching me what he (thinks) and feels about what I went through,” she said. “Everything he taught me is from a personal place.”

Today, Belton is married with two children and a stable job with EBSCO. Her book was published earlier this year. It utilizes accounts of sexual trauma in the Bible to share hope with sexual trauma victims.

“We do a disservice to ourselves by isolating our suffering,” she said. “Suffering is suffering and sin is sin. We don’t know why God allows any suffering to happen. ‘Why’ is always the question.

“My goal is to get the message out that God cares about those who have been sexually traumatized,” she added. “God hasn’t turned his face from them, but has love and redemption he wants to share with them.”

To help share the message of her book, Belton has started a drive to donate copies of the book to the Lovelady Center in Birmingham.

For more information about Belton’s book, “Laying at the Altar: The Ultimate Solution for Healing Sexual Trauma” or the Bible study she wrote, “What About Me? Bible Studies for Finding Hope in God After Sexual Trauma,” contact Belton at experience.god@hotmail.com.

By CHRISTINE BOATWRIGHT / Staff Writer CHELSEA – After losing their home to the April tornado that tore through Pratt... read more