Giving thanks from the heart 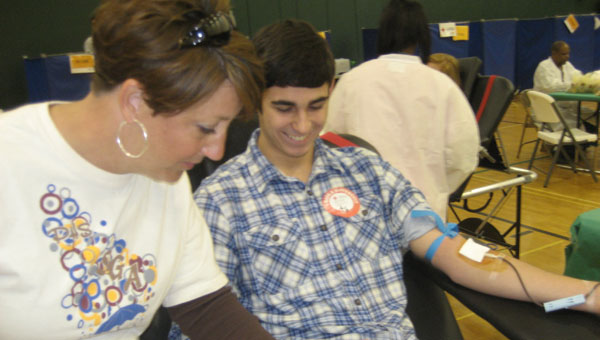 PHS students had a chance on Nov. 1 to participate in a drive that might be even newer to them than driving a car. The SGA joined with the American Red Cross to host a blood drive at the school. All eligible students received a letter explaining the need for blood contributions before the blood drive date. Students who were 16 or older were allowed to give blood with parental consent if they met the minimum weight guidelines for their height.

“Our Red Cross contacts tell us that many people gave blood after last April’s tornadoes,” SGA Sponsor and Math Teacher Keri Ross said. “A decline in giving after that date has created a blood shortage. Some hospitals have had to postpone surgeries due to a lack of donated blood.”

While we know that giving blood could save lives, seeing donated blood help a family member is a motivator for many blood donors. PHS English teacher Tonya McGairty experienced this reality in her own family.

Students had their own reasons for donating blood. PHS junior Katie Hill decided to become a blood donor because of her sister’s struggles. Hill’s 23-year-old sister, Nicole McGuire, was born with cerebral palsy. McGuire endured many surgeries as she was growing up.

“Nicole’s first surgery was when she was 5 years old,” the girls’ mother, Kathy Littlefield, said. “Nicole had surgery every few years of her childhood. She was a brave little girl.”

“I wanted to give blood because other people gave for my sister. This is my way of giving back,” Hill said.

“Our students are so young. They want to help in the community, but many times they don’t know how,” Ross said. “We keep our eyes open for ways that our students can give back to the communities that give them so much.”

Giving blood requires no experience, a small amount of time and only a fraction of the bravery of those facing serious health issues. Sharing a pint of blood that could save someone’s life allows students to experience the joy of helping others.