Critters enjoy day in the park

Dogs — from a Great Dane to a Chihuahua — romped, played together and made polite conversation in Montevallo’s Orr Park on Sunday, Oct. 23 at the 5th annual Critters by the Creek celebration. The weather was beautiful, and the “people-parents” and their pups had a wonderful day.

There were many activities going on all around the park. Early in the afternoon some 55 fortunate dogs received blessings bestowed by Father John Wesley, of St. Andrews Episcopal Church, in a Blessings of the Animals ceremony. The Humane Society was there with vaccinations at a discounted cost, free tags and micro-chips.

“We had many more activities,” said Becky Tutwiler, who coordinated the event for the Park and Recreation Board, “including a K-9 Police Demonstration, face painting, live music, good food and free pony rides by Hubbard Pony Rides. The day ended with the ‘Critter Crawl,’ a parade of the costumed pets and their owners.”

Tutwiler explained that awards were given for best Halloween costume, perkiest ears, best smile, best dressed, most beautiful, best trick and cutest little dog, etc. No award was given for distinction, but perhaps should have been, to the lone cat and large pet rat that braved the event. 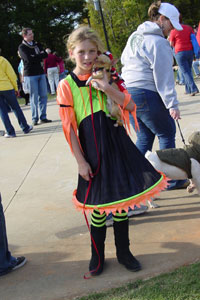 Brooklyn Lee and her little Chihuahua win the “best costume” award at Critters by the Creek at Orr Park in Monrevallo. (Contributed)

The “best Halloween costume” went to Brooklyn Lee and her little Chihuahua and the “perkiest ears’ to Cody, the large white Husky-Shepherd belonging to Michele Pawlik.

Two of the organizations that set up booths included: Rescued Hearts — Alabama Pub Rescue and Adoption (Alabamapugrescue.com) — with several of the beautiful, loving, small dogs; and the Montevallo’s ValloCycle program.

Venders were Dixie Home Crafters, Montevallo Dog House and Red Dog Sitters. They all donated $25 each to the Humane Society. T-shirts were also sold by Recreation Board members to benefit the humane society.

Darby Jack furnished the music and the sound was coordinated by George Howell of CGS Events.

Members of the Recreation Board are, in addition to Tutwiler: Carolyn Miller Kirby, Sue Tedford, Cindy Holsombeck, Angelia Gentry, Johnny Holsombeck, Sharon Gilbert and Rusty Nix who, is the city council representative.

Information regarding upcoming recreational event should be directed to Becky Tutwiler at 665-0710.

By BETH CHAPMAN / Community Columnist Logan Holloway was raised in Shelby County and recalls her life as “normal.” She... read more