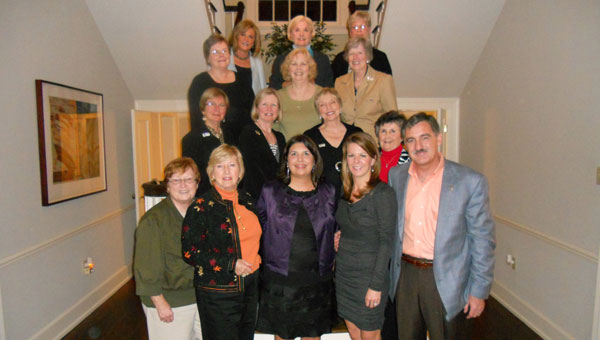 What better weekend could there be than to join good friends for two days of non-stop reminiscing about college days and catching up on families and friends? Twenty-two lucky Alabama College (University of Montevallo) graduates, of maybe 45 years ago, who call themselves “The Same Sweet Girls,” do just that as they come together twice a year.

The reunions are usually held, one as a spring break at the beach, and the other a fall getaway in the mountains.

However, this year, because several of the girls had not visited the Montevallo campus in a while, they gathered here in October.

“Our reunion is pretty darn special,” said Patti Galloway Hughes, “because a conversation can carry over from the previous meeting and continue like there was no break. The thread of like experiences with children, marriage, health issues, careers and money problems are woven together with jokes, reviews of books read, movies and music. All of these experiences draw the group together and all the other things in life pull the SSG back to Montevallo.”

The weekend in Montevallo was highlighted with a tour of the campus when they viewed the renovations to Peterson Hall (once the infirmary), the new Jim Wilkinson Student Life Center and the Bower Colonnade (of particular interest because it was named for SSG’s Sandra Bond Bowers). Other interesting happenings were afternoon and evening visits to the James Wyle Shepherd Observatory with Dr. Michael Sterner.

The girls also especially enjoyed meeting UM President and Mrs. John Stewart, who graciously welcomed them to Flower Hill. During that visit the SSG awarded a UM scholarship to Lisa Nichols of Helena. Good food and good conversation came together as the group had lunch with Loretta Douglas Cobb, a covered-dish dinner with Pattie Hughes and brunch at Mary Elliott Cobb’s farm in Wilsonville.

In addition to Hughes, Bowers, Loretta Cobb and Mary Cobb, those who attended the reunion were Shannon Shelton Brown, Sandra King Conroy, Margo Fallin, Carol Wishum Harris, Linda Norrell Hinson, Mary Carol Canon Hitchcock, Mary Ellen Lazenby Slaton and Carol Bailey Watson. An interesting note is that although Sandra King Conroy took the idea for her book entitled “Same Sweet Girls” from this, her group of special friends by the same name, the novel is fiction. After the exciting weekend in Montevallo, the girls went home with throats sore from talking, an extra five pounds created by the wonderful food, heads full of happy memories and already looking forward to the SSG spring break at the beach.