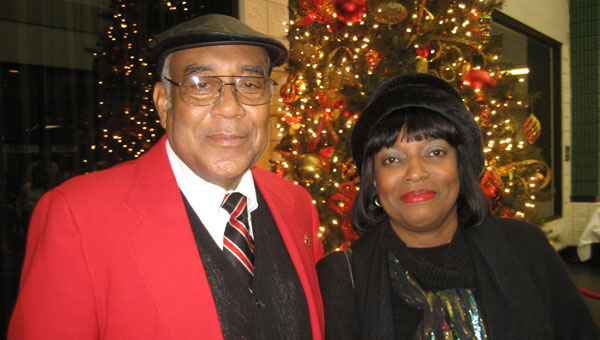 Pelham Beautification Board members greeted 1,000 tree lighting attendees as they entered the Pelham Civic Complex with a treasure – the city’s traditional gift of a tree ornament. This year, the ornament is a golden Santa inscribed with “City of Pelham 2011.”

The ornament is a token; however, true treasures were also at Pelham’s tree lighting. Since groups from each of the city’s schools perform, the event becomes a gathering of children, parents, community leaders and old friends.

Always held on the Monday following Thanksgiving, stress is brewing at the beginning of a new work week. Arriving at the tree lighting this year, my holiday stress dissolved when I met another treasure just inside the door. Pelham Beautification Board member Mosely Johnson was giving away ornaments and looking festive in his red coat.

Johnson and I are email buddies. A retired Greyhound bus driver of 45 years, Johnson knew my father as a young man. They met when Johnson was a Birmingham bus driver and my dad was a Birmingham policeman in the ‘60s. The two men reconnected in 1986 when Johnson married Linda Pullum-Johnson and moved to Pelham. Nominated by retired Mayor Bobby Hayes to serve on the Beautification Board, Mosely Johnson began serving Pelham.

A true community servant, Johnson is in constant motion. As a substitute bus driver for Shelby County Schools, he has driven Pelham’s children home through the years. Serving his fifth term on the Pelham Beautification Board, this was Johnson’s 10th tree lighting.

Brother Mike Shaw thanked Pelham Mayor Don Murphy and Pelham’s City Council for “always providing for this festive event to begin our Christmas season.” City employees go beyond the call of duty preparing for the tree lighting, but what about the volunteers?

Shaw shared that current Beautification Board President Maurice Mercer is one of Pelham First Baptist’s newest deacons. True community servants, Beautification Board members also judge holiday decorations, select a business and residence to recognize each month and work to improve the city’s cleanliness and appearance.

“I enjoy serving my city,” Johnson said. “This is my way of giving back for the good life I’ve had living in this fine city.”

By CONNIE NOLEN / Community Columnist When my students and I saw that this year’s National Scholastic Press Association’s Convention... read more