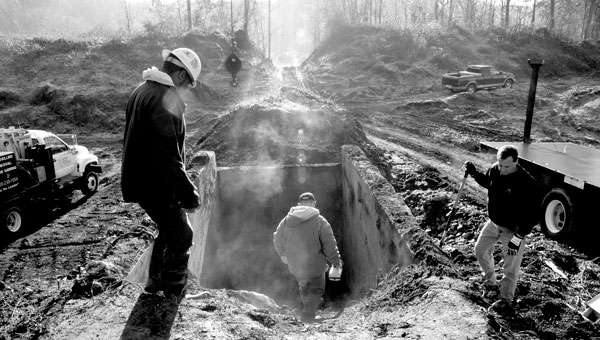 Brian Hinds and Billy Smith descend to the entry of Eureka No. 4 mine shaft as Brian Wallis cleans away residual muddy clay debris from the top rim. (Contributed)

As we stood in the brisk morning air overlooking the newly revealed concrete slab portal inscribed “1917 Eureka No. 4,” sunlight filtered through the steam rising from within the mine shaft below.

“It’s as if it’s breathing its last great breath,” Brian Wallis observed, as our small group awaited the arrival of the men and equipment who would be removing the head wall of this entrance and transporting it back to its resting place at the Helena History Museum.

Indeed, the mine-dragon, which snaked its way underground considerable distances to the south, east and west further down in the shaft, did appear fiercely protective of all its hidden tunnels, which once teemed with coal miners just doing their dirty, demanding job for the Eureka Coal Company. This particular entrance is believed to have been one of the last two intact remaining portals in our area and was opened to meet the growing demand for coal prior to World War I.

Ken Penhale’s grandfather, C. I. Hinds, was the foreman of Eureka No. 4, and Penhale remembers walks with his grandfather as a boy throughout this area. Homes (no longer standing) housing the workers and their families and a church, whose remaining brick foundation pillars we also photographed last week, would have once comprised the community that existed around this mine. An earlier photo of this entrance is pictured on page 41 in the “Images of America Series, Helena, Alabama. The large tree pictured growing out of the entrance became part of the debris as the entry shaft was recently uncovered and the huge concrete-slab roof, which kept the mine safely blocked from inquisitive wanderers, was thrust away.

Protective metal bars prevented us from doing more than peering down into the shaft. Hal Woodman took a few photos between the bars that reveal a dim idea of what lay beyond, but our cameras were definitely light-challenged. As the ABC Cutting Contractors truck arrived and their foreman Billy Smith examined the job at hand, it also became apparent that removing the 4-foot-by-5-foot headstone would require some of the companies largest water saw blades. Hal Woodman, Barbara Hyche, Joy Childers, Billy Dean Harris and Ken Penhale pledged the funds to make the excavation possible so that city monies were not used. It was mid-afternoon before the four cuts that made possible the lifting and removal were complete. A second slab from an adjacent area dated 1917 was also salvaged and Penhale says that architects plan to incorporate it into the new high school building.

It was definitely an unusual experience to spend time photographing this project, but with 300-plus photos taken, this latest segment of Helena’s history stands to be well-documented.

The hillside itself will be leveled about 70 feet to accommodate the school and other rock from the mine site which may be incorporated into its foundation.

By LAURA BROOKHART / Community Columnist Katie Allen has been hand-painting Christmas ornaments for the past 12 years; she conceived... read more