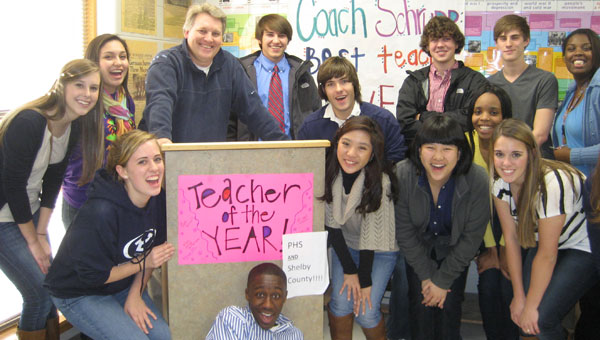 “Mrs. Nolen, tomorrow we’re trying to surprise Coach Schrupp with a party since he won Teacher of the Year. Since I’m ahead in competitive writing, can I go to the party during seventh?” Lele Willis asked.

“And this party is a surprise? He doesn’t know?” I asked.

“For once, I think Coach Schrupp is clueless,” Willis responded with a grin.

“Who is taking pictures?” I asked.

This conversation made me the official photographer for Schrupp’s celebration. Normally, I’m not a fan of impromptu school parties, but when honor students take it upon themselves to make congratulatory signs and bake confections for a tough teacher who has earned their respect, I am thrilled.

We met outside Schrupp’s door at the appointed time and the students burst in, creating a flurry of cheers, signs and cupcakes. For once, Schrupp was speechless.

“Thanks,” he mouthed silently in my direction. I shook my head to indicate I was not the party planner.

“They did everything, coach,” I said. “I just heard about the party and asked if I could take pictures.”

The affection of Schrupp’s students left him speechless a second time. Kids say that Schrupp’s class is not only extremely hard, but also a stimulating challenge. One student said, “Schrupp lectures, but his lectures are entertaining.”

“His whole attitude is energetic,” senior Lele Willis said. “Anyone who sleeps through Coach Schrupp’s lectures could probably sleep through the second coming!”

Schrupp left the classroom for one year to become an administrator.

“I went back to the classroom because teaching is my passion,” Schrupp said.

“Certain eras of history could be mundane, but Schrupp somehow makes everything comical and witty,” PHS senior Sara Smith said.

Seniors Jake Martin and Taylor Crocker are reported to keep a book of Schruppisms — those phrases characteristic of, and often unique to, Schrupp.

“Coach Schrupp leads up to a concept and then allows students to discover the importance for ourselves,” Willis said. “Coach Schrupp’s class has energized my love for learning. His enthusiasm for learning makes me want to be a teacher like him. I want to spread the love of learning to my own students someday.”