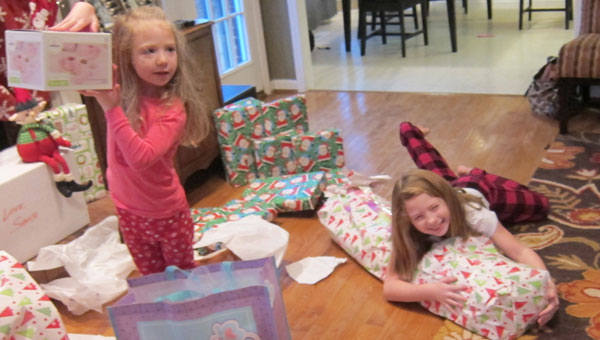 Having small children in your home at Christmas is magical, but one element of those Christmases that I don’t miss is the toy packaging.

As the mother of two daughters, I have rescued many dolls from imminent strangulation and mutilation threats from twisty ties and plastic packaging.

All girl parents know that dolls are secured to the cardboard backing in their packages by twisty ties around their necks, torsos and ankles. Tape secures doll hair to the cardboard. The packaging of these dolls should probably be reported as abuse.

As a boy parent, I have put together numerous car tracks, placed more center white lines than road construction crews and added stickers galore to create authenticity on plastic roads and metal cars.

As my children have gotten older, their Christmas wishes have shifted from toys to electronics. This year, one of my kids got an iPod for Christmas. Purchasing this product required scrimping and saving. The scrimping and saving was not as painful as the activation which, in the end, exceeded 48 hours in actual time. How I longed for a doll to rescue from cardboard as Dec. 27 rolled around and iTunes still refused to load on our home computer.

According to the Apple support guy’s thinly veiled innuendo, the problem stems from the fact that our home computer is a PC. My explanation to Apple guy was that my employer uses their competitor’s operating system and taking my work home makes it necessary to have that system at home. What I did not say to the Apple rep is that I’m afraid his company is attempting a cyber world takeover.

The capitalization of iPod troubles me. The lower case i and upper case Pod bring to mind pods from horror movies hatching into zombies taking over the word as individuals disappear. The company symbol being the fruit that led to the fall of man in the Garden of Eden is troublesome also.

The Apple guy’s condescending attitude makes me fear that, should I be forced to speak to an Apple rep again, I might seriously jeopardize my chances of meeting Jesus someday.

In Apple’s defense, my son later spoke to a rep who helped him coax iTunes onto our PC — and the iPod launched!

Next Christmas, I’d rather roll out miles of white center line sticker for toy car tracks on my hands and knees.