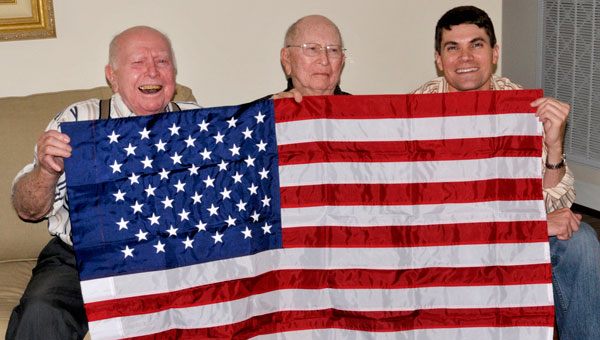 Pictured with the new flag raised in the Riggs’ yard in their honor are Lowell G. Holmes, A.P. (Pete) Holmes and Major David Rigg. (Contributed)

On a cruise this past summer, Rusty and Shirley, who is an only child whose father passed away 10 years ago, visited Pearl Harbor and saw the Arizona and Missouri Memorials.

“It brought home to me what all those who served in World War II had done for us,” Shirley Rigg said, “And I wanted to hear more of their memories from that time.”

Her uncle, Lowell G. Holmes, served on the USS Missouri or Big Mo, the site of the surrender of the Empire of Japan which ended World War II and A.P. “Pete” Holmes, served at Pearl Harbor after the bombing.

Together they were seated in the living room sharing photos and scrapbooks with the family. Rigg had purchased USS Arizona and USS Missouri ornaments for each and for her own Christmas tree, and during their visit, a new American flag was unveiled and hoisted in the Rigg’s yard.

Lowell Holmes received a deferment during the war, as he was the last son in a farming family. During the war, he said, they raised peanuts at the government’s request.

Lowell Holmes enlisted in the Navy in 1946 and served two years aboard the Big Mo, sailing out of Norfolk, Va.

Lowell traveled to Pearl Harbor to the dedication of the USS Missouri in January 1999 when the Missouri was opened as a museum.

Then age 20, he was assigned to be a chauffeur for officers and dignitaries.

He recalls, “the sidewalks and streets in Honolulu were crowded with people, but they treated us good.”

“On Sunday, we would buy us a half-stalk of bananas and drive all the way around the island.” They were also instructed not to pick the pineapple, he said.

Rigg’s son, Major David Rigg, is in the Alabama National Guard. He served in Afghanistan from December 2009-October 2010. His unit was stationed at Fort Hood when the shooting occurred there.

Major Rigg said, “The Guard and active duty are now mixed on flights — it required 10 connections to get us to Afghanistan. We worked with the British, Dutch, Germans and Australians. It was an international mission.”

Grinch no match for Helena residents