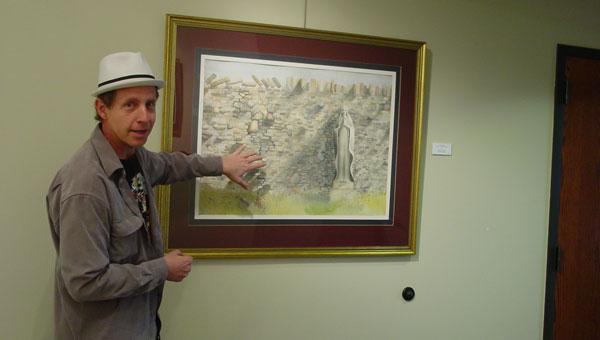 Artist Christoffer Frank talks about one of the pictures in his “Lost Series” showing at the Parnell Memorial Library Art Gallery. (Contributed)

The distinctive and thought-provoking works of Christoffer Frank are on display in Montevallo’s Parnell Memorial Library Art Gallery until Feb. 29.

A reception for the artist was held on Jan. 15 in the gallery, along with a meeting of the Montevallo Arts Council.

Frank works in watercolor, pen and ink, charcoal, graphite and oil; but his first choice is watercolor. He most often paints in series, and the series are progressive. Those in the current show are entitled, “Lost Series,” painted in the early 1990s and “Sacrilege & Other Related Heresies;” a more recent and fascinating work of human forms painted on the pages of a very old Bible.

“Christoffer Frank is a wonderful fellow,” said Suzanne Hurst, president of the Montevallo Arts Council. “I love his work. His paintings seem to float across the paper. His depictions of the human form are fluid and exquisite. I hope we will continue to see his work as it enriches our lives.”

Most will find the exhibited paintings sensitive, peaceful and reassuring. Even a brief viewing of the images will make it evident to some that they were created by a deeply spiritual artist with religious intent; and there’s a story there beginning with the name the artist was given at birth.

“What’s in a name? Perhaps nothing, perhaps it holds a sense of destiny. Christoffer was named by his parents as an offering to God to fulfill His purposes and callings; hence, the unusual spelling of his name, ‘Christ’s offer.’ Once Christoffer signs his name to a piece of art it becomes an offering and a testimony to the gifts and callings of God.” The quote comes from Christoffer Frank’s website.

Frank has traveled an interesting road in his effort to accomplish God’s purpose. He sold his first painting at 13 years of age, and graduated from high school in Texas with numerous awards and generous scholarships, but after one year at Navarro College, he joined the Army as a broadcast journalist. Following the stint in the Army, Frank responded to a call to the ministry where, for the next 12 years, he led many people to Christ as he served several conservative churches in the Bible Belt.

In 1996, he left the ministry and returned to his art. Currently, he is living with his two sons in Alabaster where he is re-launching his career and finding his place in the art world.

For information regarding the artist, go online to Artbychristofferfrank.com or contact him by email at cfrankgo@yahoo.com.

Through the good times and the sad, neonatal intensive care registered nurse Tanna Davis says she knows she is where... read more