Robin Norsworthy takes a leap to a new career 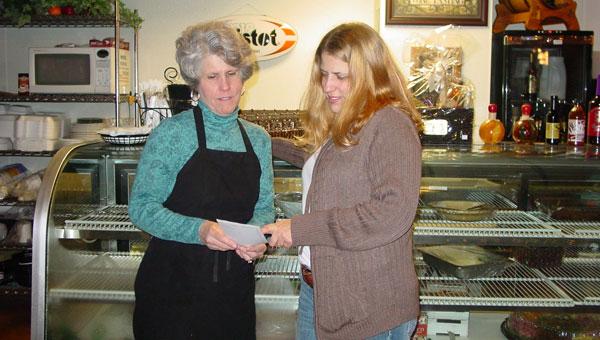 Robin Norsworthy talks with her daughter, Becca Terpening, about the day’s menu at The Bistro at Vizzini Farms Winery. (Contributed)

The jump from the pulpit to the winery may be shock-producing for some people, but Robin Norsworthy appears to take it in stride. From being the pastor of Montevallo’s University Baptist Church to filling the role of a working partner of The Bistro at Vizzini Farms Winery in Calera is just another change of careers that Robin enjoys.

Her first job was as a waitress when she was in high school, and then she took the time out for college as she earned a Bachelor of Arts degree and a Master’s in Divinity from Mercer University, and a Doctorate of Ministry from Columbia Theological Seminary in Atlanta.

She spent 18 years working part-time in ministry, mainly in music, and full-time as a bookkeeper.

For the last eight years she has been in full-time ministry at UBC. Montevallo knows Robin as a fine pastor who loves and is concerned about her church and her community; but also as a wonderful actress, singer, piano and guitar player. She will forever be remembered as Mother Superior, the hilarious nun, in the Main Street Players’ production of “Nunsense.”

In explaining her recent decision to resign the position at UBC to become a restaurateur, she said, “I’m looking at this change as a sabbatical; a time to rest from full-time ministry, but continue to minister in different ways. My daughter, Rebecca Becca Terpening, is finishing up culinary school and was offered the opportunity to take over the restaurant portion of Vizzini Farms Winery. Although she always dreamed of running her own restaurant, she didn’t have the financial resources, or time (while finishing her degree), to take this opportunity and run with it.

“After a lot of heart-wrenching consideration, I decided to give her my time and some start-up resources to get her up and running.  God asks us to minister to all people and often we forget that our family should be the first. After she is established, I’ll see what’s next in ministry.”

Robin explained that Becca learned to cook in her mother’s kitchen when she was about 9 years old, and her yeast biscuit quickly became a favorite in the family. She has had a wealth of experience working in restaurants including several years preparing the food at Billy’s Oyster Bar in Panama City, Fla. A number of years ago, Becca moved to Montevallo and decided to follow her dream of her own restaurant.

Stephanie Dikis holding some of her pottery in her workroom. (Contributed) By PHOEBE DONALD ROBINSON / Community Columnist The Fifth... read more