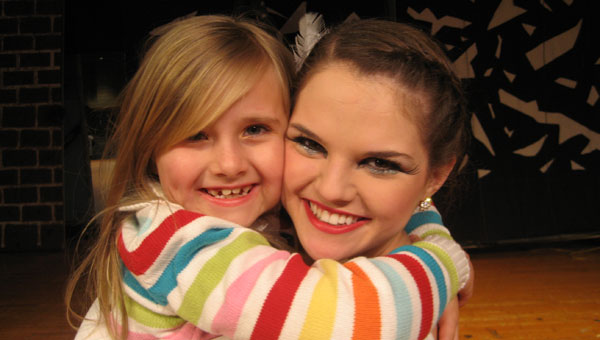 Cassidy Sumpter embraces Maddie Gathings after the “With Every Beat” event at Pelham High School. Cassidy is the sister of Carson Sumpter, who passed away last year after a lengthy battle with cancer. (Contributed)

“If you ever hear the words ‘You have cancer,’ I hope the next words you hear are, ‘But we have a cure,” Amy Montgomery, mother of a childhood cancer survivor, said at the With Every Beat event, the dance fundraiser hosted by the Pelham High School Pantherettes.

While Montgomery’s stats are shocking, numbers did not drive last Saturday night’s performance.

Names and memories fueled the evening.

Pelham High School junior Pantherette Maddie Gathings spoke into the microphone: “Tonight’s event is dedicated to Meredith Ward, a former Pantherette and life-long dancer, who passed away at the age of 25. With Every Beat is also dedicated to my boyfriend, Carson Sumpter, who lost his battle with cancer last July.

One year ago, I performed a dance on this stage as Carson played a song that he wrote for me.”

My memories of Carson’s song and Maddie’s dance are surreal. To my knowledge, no one recorded that performance. This year, cameras captured an ensemble dance performed by Gathings, Shelby Bradford, Merry Michael Ramsey, Savannah Windham and Carly Lawson to the song “Into the Light.” Rich with raw emotion, alive with painful memories and set against a backdrop of light, hope and strength, this “Into the Light” song and dance pairing feel like the sequel to Carson and Maddie’s performance from the previous year reminding us that we all go on together into the light toward hope battling for a cure.

Why battle cancer with dance?

“Cancer leaves you feeling powerless,” Gathings said. “Through With Every Beat and Relay for Life, I feel like I am taking back some of the power. Relay for Life fights cancer with the same drive I recognized when Carson fought his battle. Through Relay for Life, I pray that people are inspired to kick cancer’s butt. I’ve had the experiences God destined for my life up to this point. Now, it’s up to me to find my purpose and give back.”

Please join PHS students in giving back. Proceeds from DVD sales of the performance will go to Children’s Miracle Network and the American Cancer Society. Email PHS broadcast teacher Brian Rockett at brockett@shelbyed.k12.al.us to order your DVD. To join the PHS Relay for Life team, contact Karen Varner at kvarner@shelbyed.k12.al.us.