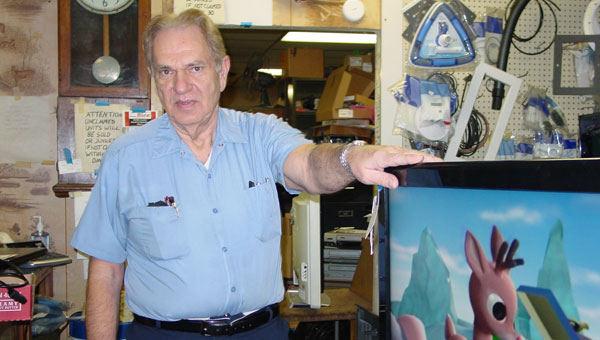 Walt Czeskleba talks about his life and his work. (Contributed)

Walt Czeskleba might be called a fixture on Main Street in Montevallo. He has served this community for more than 40 years; repairing everything from a Big Ben clock to the latest television sold today. Most people think, “There’s nothing Walt can’t fix.”

The Czeskleba family came to Montevallo in 1950 when Walt was only a year old, and he attended the local schools. He began working part-time after school for a repair shop in Alabaster when he was only 15, and after graduating from high school, he studied electronics in Birmingham and at Nunnelley State Vocational School. With the encouragement of local businessman Don Lovelady, Walt opened his own business in 1972. Don rented him, at $25 a month, the small space on North Boundary Street, most recently occupied by Stamps Realty. From there he moved to Main Street, and in 1975 purchased the two buildings on the corner of Main and Middle.

“In those earlier days,” said Walt, “Montevallo was thriving. Even though there were four other repair shops here, there was plenty of business for everyone. During the 1970s through the ’90s, I had up to five workers, and we did lots of warranty work for appliance stores like Lovelady and Sears.”

Today there are few repair shops; televisions and other electronics are so inexpensive that people will spend a little – not much – for repairs; they just buy new.

Never-ending changes are in technology; Walt regularly spends two nights a week studying in an online class to keep abreast of those. Even with that arduous study and long work hours, he confesses that work is his life and he loves his life.

Walt explains that he still has all of the business he can handle, that he has many of the same customers he had when he opened the shop and that some of them are still watching televisions they bought from him in the ’90s.

As an example of the good relationship he has with his customers, he relates that sometimes he tells one, by phone, how to make their own repairs. He charges nothing for that, but often they will send him a few dollars in the mail, or bring him cookies or a cake.

“If I had to start over again,” he said, “I would locate right here in Montevallo; the people are as good as gold. I’ve never wanted to be anyplace else, and I’ll be here working in this shop until the day I’m not able to get here.”

In the blue hour and with the Orion looming overhead, Frank Orona captured the Calera and Shelby 2022 resting next... read more