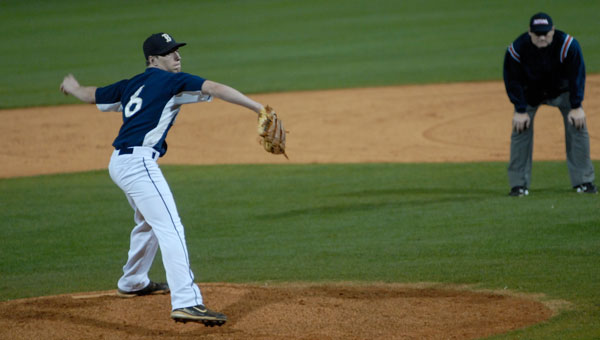 NORTH SHELBY — Briarwood Christian School sophomore Ethan Simmons didn’t take any time to celebrate a crowning achievement in his career following his first ever start for the Lions in a 11-0 win over Spain Park in the Jay D. Kynerd Memorial tournament championship game Feb. 23.

After pitching a no-hitter and only allowing three Spain Park baserunners in five-inning complete-game shutout in the title game, Simmons shook hands with opposing players and quickly picked up a rake and headed to smooth the dirt at first base.

Simmons didn’t want any of the spotlight following his impressive performance. He deflected credit for the no-hitter and praised his battery mate, senior catcher Ben Craft, Briarwood Christian pitching coach Colter Bean and his defense.

“(Craft and Bean) called it, and I just threw it,” Simmons said. “My defense helped me out.”

Briarwood Christian coach Steve Renfroe said he knew Simmons was a special player during his freshman season, when his hurler sat down all three batters he faced in a relief appearance the Lions’ season opener in 2011.

Arm fatigue quickly took Simmons out of the pitching rotation last season, but Renfroe said he’s glad to see him back out on the mound.