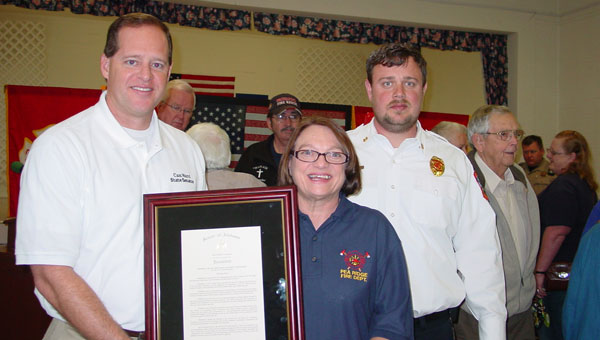 Pea Ridge has the reputation of being a closely-knit community of strong people who care deeply about each other and about their history. That was evident on Saturday, Feb. 17, as a multitude of local folks and guests celebrated the 40th anniversary of the Pea Ridge Volunteer Fire Department.

Linda Booth, coordinator of the event, opened the program with remarks noting the history of the department and crediting those who contributed so much in time and money to establish and maintain the service.

She related that the department dates back to 1972 when a group of men got together, and out of the need, created the fire department. At a community-wide meeting a board was elected, by-laws were written, and Jimmy Lawley was elected the first fire chief.

From that early beginning, the fire department has grown to include the emergency medical service, updated equipment and sophisticated training for its volunteers.

County Commissioner Jon Parker, a former fire chief, introduced other past and present fire chiefs, board members and the ladies auxiliary.

A highlight of the celebration was the presentation, by State Sen. Cam Ward, of a resolution from the State of Alabama recognizing the department’s 40 years of dedication and service.

Lucky’s, Piggly Wiggly and Buffalo Rock furnished the lunch that was served by the ladies’ auxiliary. Visiting fire departments were Brierfield, West Shelby and County 17. The Central Alabama Fire Attack Organization provided a Smoke House for the children to experience, and Smokey the Bear was present. Alabama Forestry brought equipment and distributed information. Air-Methods landed its helicopter in the ball field. Yellow Dot and 911 were on hand, and the steel beam from the World Trade Center was on display.

As volunteers and visitors looked at an exhibit of old pictures, several interesting remarks were overheard: The first fire dues were $12; In 1977 women were invited to join the service; The men opted for building their own fire engine at one point and got many years of service from it; The department suffered one death in the line of duty, and from that death came a life-saving Alabama law that makes tankers safer with baffles in the tanks to prevent the load of water shifting causing roll-overs and accidents.

“Pea Ridge Fire and Rescue has been blessed with good fire chiefs and volunteers over the years,” said Booth. “Some of the original fire members are still on the job and their children are following in their footsteps. The past history predicts a promising future for this department.”

Relics from the past being gathered in Chelsea

Early artifacts from the Chelsea area are being collected for a city museum. In the photo, Bob Wanninger (left), Juanita... read more