Two years ago, I wrote that Fran’s Restaurant was the heart of our Pelham community — a place where people enjoyed good food and friendly company. Today, that heart is forever changed. On Friday, Feb. 24, Fran Driver passed away at the age of 81.

When I asked Driver’s daughter, Beverly Smith, if she would keep the restaurant going, she said, “Yes, oh yes.” Her husband, Buddy Smith, smiled and nodded in agreement. Although many are grieving Driver’s passing, they’re also admiring Driver’s spunk that gathered, inspired and fed Pelham for more than 50 years. 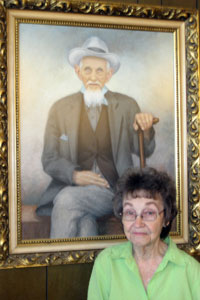 Fran Driver stands below one of her many paintings. This painting was one of her great-grandfather, who was also a Pelham resident. (Contributed)

Driver counted Pelham’s citizens as her extended family. In fact, she prepared holiday dinners for Pelham. Former Mayor Bobby Hayes said, “Monday before each holiday, Fran served a Thanksgiving and a Christmas dinner that you couldn’t pay for. These meals were her gift.”

“Fran Driver took us under her wing when we moved to Pelham-and she never let us go,” Hayes said. “I might have been mayor, but I was fair game. If I did something she didn’t like, I knew I would have to eat my breakfast hearing about it.”

Pelham businessman Neil Bailey said, “Fran cared about people and her community. She was consistent. She held people accountable. She wanted you to remember the good in people.”

Bailey also shared that a giving spirit ran both ways between Driver and her customers, remembering that several of Driver’s customers worked together to put a new ceiling in the restaurant one Christmas.

“We wanted to buy her a flat screen television for the restaurant wall, but Fran wouldn’t let us,” Bailey said. “She said, ‘People might sit around here watching TV all day and drinkin’ up my coffee!’”

Driver wanted folks to be productive. When she wasn’t running her café, Fran was an artist. “When I was mayor, Fran’s paintings covered my office walls,” Hayes said.

“Fran was Pelham’s historian. She remembered all the people who lived here when she was growing up,” Pelham City Councilwoman Karyl Rice said. “When the community began incorporation, she and her husband, Ed, collected signatures on the petitions. They were leaders in the city’s establishment.”

Bailey spoke for many saying, “Fran Driver was a great and generous lady. I’m really glad I knew her.”

A great lady until the end, Fran Driver passed late Friday evening-after her city was fed and settled for the night.

Smiling while boiling and counting blessings

By CONNIE NOLEN / Community Columnist Blake Poljacik’s dad said, “She does what to the ink cartridges?” I’ve been boiling... read more