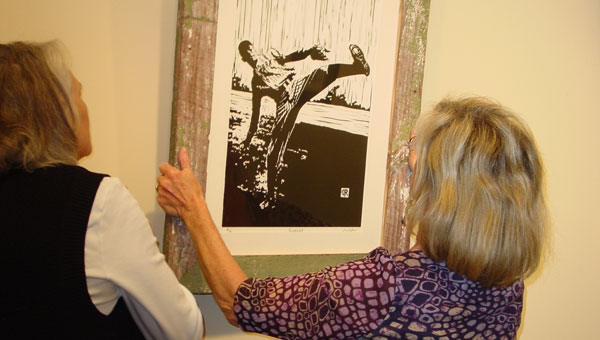 There is an exciting exhibit of block prints currently showing at the Parnell Memorial Library Gallery. Many may remember the artist Debra Riffe for she has frequently shown her work at the annual Orr Park Arts Fest.

Riffe is a native of Tupelo, Miss., and a graduate of Howard University, where she gained a degree in illustration. She worked in Washington, D. C. for several years and then moved to Barranquilla, Colombia, where she lived until moving to Birmingham in 1996.

Riffe’s website explains that while living in Colombia, she traveled extensively around the Caribbean, learning about the region’s unique cultural and historic heritage. She discovered that Colombian art, customs, musical styles and cuisine were remarkably similar to that of the American South. Those similarities and her memories of her wonderful travels are revealed in her art.

The artist taught herself to needlepoint and took the designs from tucked away sketches and old photographs. In 2004, she began converting her needlepoint canvases into designs for linoleum block relief prints.

She sketches her ideas with a pencil, cuts the designs into the linoleum block surface with various gouges, inks the block and prints by turning the wheel of a printing press.

“My linoleum block relief prints reflect my love for the South and all things Southern,” said Riffe. “The majority of my compositions depict singular, figurative images of African Americans placed in rural settings of the American South. Individuals are represented at work or at play performing everyday tasks in timeless, solitary, reflective moments; tasks that represent concepts of social status and identity. I appreciate the ordinary, and I try to introduce a setting or an experience that will stir an emotion that the viewer can respond to. At first glance, my figures appear to be anonymous. However, upon closer examination, one will quickly recognize an activity or a place long forgotten.”

Even to an untrained eye, the high degree of energy expressed in Riffe’s prints is phenomenal. Most of the prints depict characters engaged in some type of lively activity.

The artist has taught the block printing locally and regionally for many years, and she has been the recipient of numerous awards. Among those were the Best in Show Award at the Aldridge Gardens’ Art Show, and the Award of Excellence at the Montevallo Art Show.

Riffe’s work will remain on display through the month of March.

The Parnell Memorial Art Gallery is sponsored by the Montevallo Arts Council.

To learn more about the gallery and upcoming events, go to Montevalloartscouncil.org/. il.org/.

The 1968 “fixer-upper” that Lex Boroughs of Chelsea and his brother, Roy, turned into a show car. (Contributed) By SHELBA... read more