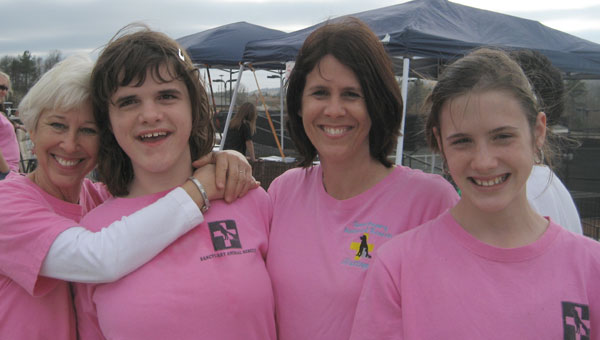 The Pelham Racquet Club’s latest event for tennis and a great cause is Game, Pet, Match! Preparing for four-legged guests, Chaney Mills from the PRC said, “Both the Shelby County Humane Society and Sanctuary Animal Rescue will have cats and dogs here to adopt.”

Several cats and dogs relaxing in pens under Sanctuary Animal Rescue’s tents caught my eye at Game, Pet, Match. When an adorable chocolate brown pup sporting a blue bandana around his neck trotted by on a leash, the dogs started barking.

Afraid my flash had started the ruckus, I retreated. A lively lady said, “You didn’t scare them. These pups aren’t used to being penned, and they don’t like seeing one of their buddies roaming without them. Sanctuary’s animals are fostered. Seven of them live on my farm right now.”

“I think I’ve found the person in charge,” I said, pulling out my pen.

“You want my daughters,” the woman said. “They volunteered me, but they’re the directors. They’re Brittney and Heide.”

Still perky, still embracing the world, her children, their endeavors, (and their old babysitter), Beiersdoerfer caught me up on the family before the grown-up girls gave me the details on Sanctuary Animal Rescue.

“We volunteered with animal rescues in junior high. We never stopped taking in animals. Creating Sanctuary made us official,” Hogue said.

“Every Saturday, we’re at Alabaster’s Pet Smart from 11-3:30 for mobile adoptions. We foster animals until they find homes,” Boackle said.

Both sisters have two kids and busy lives. Hogue is a physical therapist. Asked why her family is running Sanctuary Animal Rescue, Hogue said, “It’s a calling.”

Sanctuary’s website quotes Proverbs 12:10, “The righteous man cares for the life of his animals.”

“Game, Pet, Match will be an annual event at PRC,” Mills said.

If you missed the pets at PRC, visit Sanctuaryanimalrescue.com to see pet photos and check out future events. Maybe you’ll find a friend, too.

Teaching tennis and much more