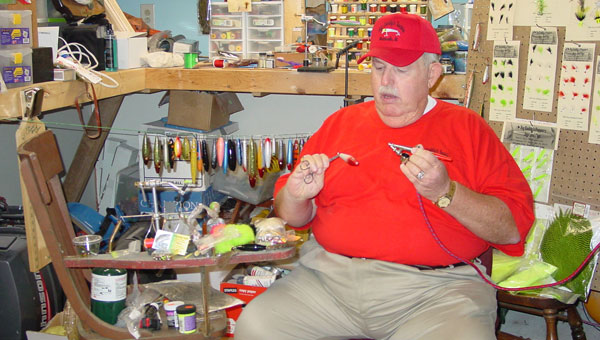 Almost everyone dreams of the day they can retire and do just whatever they want. Steve Taylor is one of the lucky ones; he is actually realizing that dream. He spends most days in the Big Daddy’s Tackle shop beside his home, making fishing lures and tying flies.

A line hung with a stream of colorful lures is strung from one side to the other, and beautiful flies adorn display boards placed around the shop.On a recent visit, Steve talked about his life and how he became a lure maker. He had a 43-year career as a policeman, beginning as a dispatcher for the Montevallo Police Department when he was 15 years old, and ending with his retirement as a University of Montevallo police lieutenant after serving there for 38 years. During those years he earned, with honors, his bachelor’s degree in sociology.

Steve lives in Pea Ridge and is married to Joannie, who works with handicapped children at Helena Elementary. He has a daughter, Amy, and son, Justin, who follows his dad and granddad as an avid hunter and fisherman.

An injured shoulder now restricts Steve’s fishing, but that love transferred easily to his lure making. He smiled as he said, “I like to say that I traded a pistol for a paint gun, I don’t really make any money and I don’t want it to be a job; it’s just a happy hobby and I love it. Handcrafting wooden lures and flies is a lost art, and I want to bring it back.”

Most of the lures in the shop are made of cedar, cypress or basswood, although he does use some synthetics. Much of the wood comes from the local sawmill belonging to Sammy and Chris Nix.

In an attempt to use natural materials, Steve looks for alpaca, squirrel, deer, elk and fox hair; as well as chicken, turkey and peacock feathers. Sometimes he barters, swapping lures for materials.

Many of the lures in the Big Daddy’s Tackle are wooden prop baits, chuggers, stick and crank baits, jigs, flies and poppers. They are all tested by Steve’s brother, Mark, or by one of his friends. The worth of a lure is the topic of many a conversation by the coffee club at Jack’s or McDonald’s.

To buy a lure or fly, you’ll have to catch Steve at home (665-7122) or at one of the area festivals where he sets up a booth. If you want to learn to tie flies, you might attend one of his free classes at Bass Pro Shop in Leeds.

Catherine Legg can be reached at clegg2@bellsouth.net