A Panther win to remember 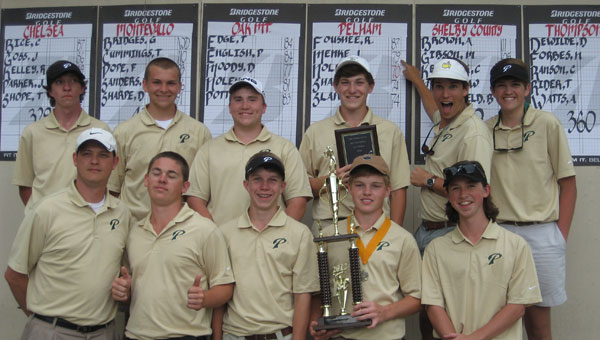 “Okay, Justin, I’m taking the day off for the Shelby County Golf Tournament and I’m looking for a win,” I said.

“I don’t know about that, Mom. Briarwood has an amazing team this year,” my son said.

“So be more amazing. Come on, son, I’m watching my first school golf tournament and I really want to see Pelham win. It’s your senior year and the tournament is at Ballantrae. Seriously, y’all win,” I replied.

As a golf mom, I’d love to attend every tournament; however, as a teacher, my class schedule won’t allow me that luxury. Golf tournaments usually begin during the school day while I’m teaching.

A devoted summer golf mom, I started walking courses with my son when he played in summer golf tournaments as a kid. Because I am a teacher, summer golf is the only golf I’ve seen.

Pelham High School golf coach Phillip Lawson moved between groups during the county golf tournament. Lawson said that junior Connor Slane was doing well and that sophomore Josh Shaw was “playing the round of his life.”

Enjoying the amazing weather, watching my son’s foursome play and catching glimpses of other Panther golfers, I tried to keep up with Lawson’s updates.

Making it back to Ballantrae’s clubhouse, Panther Golfers Justin Nolen and Connor Slane were on the back patio when teammate John Menke arrived on the 18th green. Sinking a long put, Menke celebrated with a fist pump.

As senior PHS Golfers MacKenzie Holler and Ray Foushee came in with their foursomes, excitement continued to build. As the final numbers were tabulated, the Pelham Panthers defeated Briarwood by a single stroke to take the title of Shelby County champs.

My thanks to Lawson, the Pelham Panther golfers and my smiling senior son for delivering an amazing win and for creating a day on the golf course that I will always remember.

Teens learn to pay their taxes