Leave the kids at home and enjoy a night out 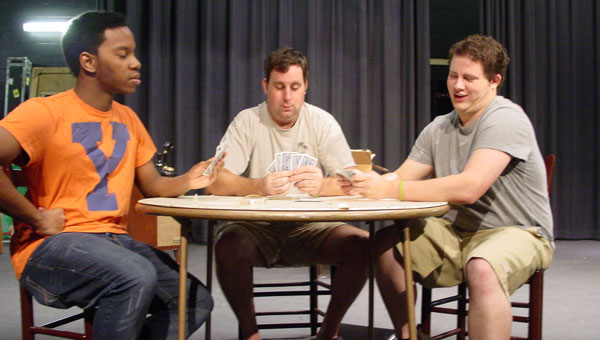 Rehearsing for the play “American Buffalo” are, from left, Stephonn Ammons as “Bobby,” Aaron Moore as “Teach” and Todd Ponder as “Donny.” (Contributed)

Make plans to leave the kids at home and take a “grown-up” night out at the theatre where you’ll enjoy an evening of hilarious entertainment. The play is “American Buffalo,” produced by the Montevallo Main Street Players, and scheduled for April 26-28 at 7:30 p.m., and April 29 at 2 p.m., in Parnell Memorial Library Theater on Park Road in Montevallo.

In describing the play, Danny Gamble, the publicity director, said, “The setting is a Chicago junk shop in which three small time crooks plot to rob a man of his coin collection, the showpiece of which is a valuable buffalo nickel. These high-minded drifters fancy themselves businessmen, pursuing legitimate free enterprise; but the reality of the three, Donny, the oafish junk shop owner; Bobby, a young junkie Donny has taken under his wing; and ‘Teach,’ a violently paranoid braggart, is that they are merely pawns caught up in their own game of last-chance, dead-end, empty pipe dreams.”

Sidney Vance, producer of the play, explained that the director is James Kitchens of Montevallo, who is a MMSP board member and UM graduate, who appeared in ”Cobb” and “The Boys Next Door” and directed “Art” and “Rumors” for MMSP. Todd Ponder of Montevallo plays Donny Dubrow, the owner of the junk store. Todd appeared in “Boy Gets Girl” and “The Tubes Glow in the Dark” for MMSP.

Korey Wilson, a UM student, is the assistant director. Toryn Washington, the stage manager, is also a UM student.

“American Buffalo” was written by David Mamet and is produced by special arrangement with Samuel French, Inc. The play contains adult language and situations.

For more information, contact Sidney Vance at 665-4053 or visit MMSP at Montevalloartscouncil.org/msp.htm.

The academic champs of PHS