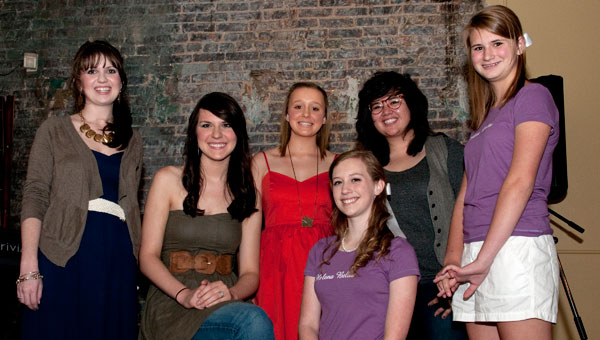 The final four LaReunion Idol contestants, Ashley Partridge, Tuesdai Singleton, Johanna Garner and Kristina David are joined by Helena Belles Kylie Woodman (front) and Anna Elliott, who were accepting donations for the Belles’ Relay for Life team. The evening was hosted by Bob Van Loan, director of the upcoming North Shelby Relay for Life on May 18. (Contributed)

Another LaReunion Idol winner will be chosen between the final two contestants, Ashley Partridge and Kristina David by the time this is published, but I want to share my evening hearing the final four on April 28.

Helena Middle School student Preston Burks, who was selected for the Alabama All-State Choir performance at Samford University, opened the evening with a performance of “Footloose.”

Ashley Partridge, Johannah Garner, Kristina David and Tuesdai Singleton, the final four contestants, range in age from 15 to 25. I am not a good judge of age anymore, so I found that interesting to know.

“This was the closest contest yet among the voting audience,” noted Robin Howell when announcing the results.

Tuesdai Singleton, who also competed in last year’s Idol, said she has been singing at school and church functions “since she was old enough to talk.” She first performed Miranda Lambert’s “White Liar,” an audience pleaser that the judges pronounced a great song choice for her strong and piercing voice. Tuesdai likes the music of Jeremy Camp, Switchfoot and John Mayer.

Kristina David, who writes and sings her own songs, says she only recently got enough courage to perform publicly. She mentions the influences of Sara McLachlan, Ingrid Michaelson, Regina Spektor and Taylor Swift, but says her goal is be true to herself.

Judges Reid Lochamy and Thomas Trussell told Kristina, “you are a natural.”

Ashley Partridge is a native of Muscle Shoals, now a grad student living in Helena while studying school psychology at University of Alabama. Her song choice, “You Can’t Drive Me Away,” a little-known piece by the Stone Temple Pilots, was deemed a good showpiece for her talents.

I found Ashley’s presentation to be sophisticated and soulful, so it is not surprising that she likes the music of Joss Stone, Alicia Keys and Aretha Franklin.

The youngest contestant, Johanna Garner, a high school freshman from Caffee Junction held her own, singing first “The Rhythm of Love” by Plain White T’s and then Adele’s “Someone Like You,” which made an appreciative fan out of me.

Johanna enjoys volleyball and arts and crafts and has given up ballet to concentrate on guitar lessons with Steve Rayburn, who also accompanied her on stage. Her favorite song ever is “I Want to Hold Your Hand.”