Holsombeck is a good man and a great cook 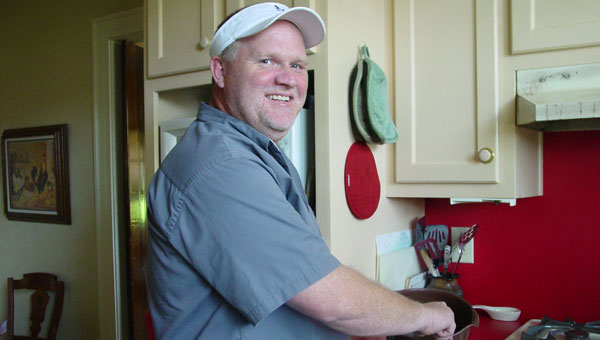 Johnny Holsombeck said that he learned to cook at his mother’s knee; literally hung around the kitchen holding to her apron strings. He watched her, ate her good food and then by helping her, he learned.

Johnny was born in Montevallo in 1967, attended Montevallo Elementary and High School, and graduated from Jacksonville State with a degree in recreation management. At Jacksonville, he volunteered with disabled children and seniors.

Immediately on leaving there, he began working in food and beverages. That career included several years with Longhorn Steakhouse, other similar establishments, and his own Double Play in Montevallo on Main Street.

He recently took a new position as manager of the physical plant warehouse at the University of Montevallo. With the regular hours, Johnny hopes to have time to continue his work as a volunteer with kids’ sports and the Boys and Girls Club, as well as time for cooking for UM and local youth athletic events and for his friends.

As I was writing this story, Mark Robinson stopped in and said, “Let me tell you what kind of a guy Johnny Holsombeck is. About 10 years ago on a day during the Christmas holidays, I passed by Johnny’s car and noticed that it was jammed full of footballs, maybe 100. When I saw Johnny and asked about the footballs, he just said, ‘Oh, they’re for kids who might not get much Christmas.’” Mark shook his head and added, “I just wish there were more good men like Johnny Holsombeck.”

The recipes this guy enjoys preparing most are appetizers and finger foods; those he makes for friends as they watch ball games or for parties he and brother/roommate, Ronnie, have. He likes to try new recipes, too, and especially likes to make his popular jalapeno poppers — those with a real bite.

When asked for a favorite recipe, Johnny gave us this oyster dressing as he admitted, “This may be usually thought of as a holiday dish, but I think it’s good anytime, and my family loves it.”

Historic Weldon Store in Chelsea has been photographed, sketched and painted many times through the years. Now it is pictured... read more