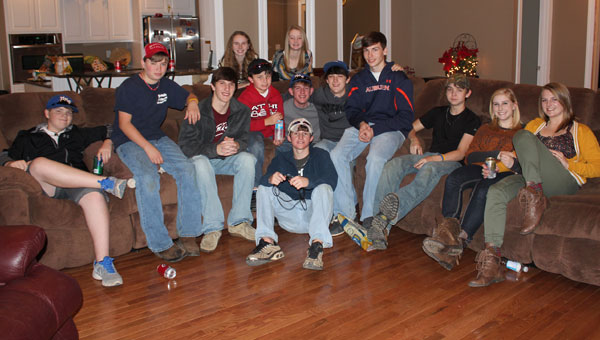 Phil Burns, a team member, said, “The core program focus is early drug awareness and planning effective exit strategies when confronted by peers to use drugs.”

On Thursday evening, May 17, the premiere event was held in the University of Montevallo’s Comer Hall unveiling the program, integral parts of which are a classroom presentation, and a video produced by the leadership team and starring 16 local teenagers with special segments from Tim Hudson of the Atlanta Braves, Aubie and Big Al. The students saw the finished video for the first time, and the parents, friends and others had an opportunity to fully appreciate the extreme effort and talent put forth by the young students.

Burns introduced the program by commenting, “I am always amazed at how much time young parents spend researching and acting to ensure their young children are properly immunized for elementary school. However, in middle school one of the largest health threats to their child is rarely discussed at home — drug use. Parents need to immunize their tweens on the peer pressures they will face on drug use and help them identify and plan effective exit strategies. We hope this program will start that dialogue and offer some new resources for educators, parents and students for drug awareness.”

The “Nah, I’m Good” program will be used in area middle schools where guest motivational speakers will introduce the video to the students and then discuss with them the topics afterwards. The Shelby County Drug Free Coalition members plan to use the program as another effective means of fighting the increasing use of drugs by teens in Shelby County.

The teens cast in the video were Abby Taylor of Hoover High School, Abby Ferrell and Sophie Wilson of Spain Park High, Ashley Brewer of Hope Christian Academy and Jackson Burns of Montevallo Middle. Students from Montevallo High include: Alyssa Dennis, Brady Hamer, Chase Hamrick, Korey Cunningham, Emily Colley, Seth Hawks, Spencer Cummings, Wesley Mims, Will Snyder, Zack Tutwiler and Preston Burns, who was given a special award for the 100-plus hours of film and editing time that he gave to the project.

To learn more about the “Nah, I’m Good” program, go to their interactive website at Nahimgood.org.