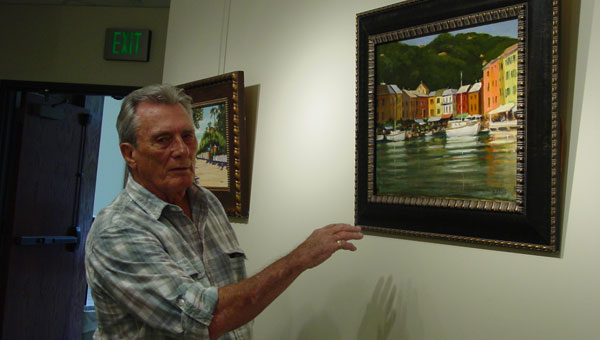 The current exhibit at Parnell Memorial Library Art Gallery features the works of Don Estes of Birmingham. The Montevallo Arts Council, sponsors of the gallery, will introduce the artist at a reception in the gallery on June 24 at 3 p.m., and the exhibit will be displayed through the months of June and July.

Estes likes to think of his work as “feel good” art, and it’s aptly called that. The exhibit is a collection of paintings, in a variety of media, of ordinary subjects made extraordinary by his use of vibrant color. Viewers are drawn into the calm and tranquil world portrayed by the artist.

As an artist, Estes was a late bloomer. He grew up in West Alabama in the 1950s, and was really not exposed to art until, while in school in Chicago, a friend took him to art galleries where his interest was sparked. He began to draw and later enrolled in an art class where he learned some of the basics.

It was only after a great number of years that Estes was able to consider art as a full-time career. He had worked those years in music and promotion, while he dreamed of becoming an artist. He said, “Finally I decided it was time to take the plunge; moved back to Alabama, and since that time, I have studied and worked steadily to improve as an artist.

Estes’ love of art is reflected in his paintings, and he expresses often that he hopes his viewers will find something in them that stirs a good feeling.

Other works of Don Estes are displayed at Little House on Linden in Homewood, Blue Phrog Gallery in Montevallo and Aldridge Gardens Gallery.

The Parnell Memorial Gallery is open during regular library hours.