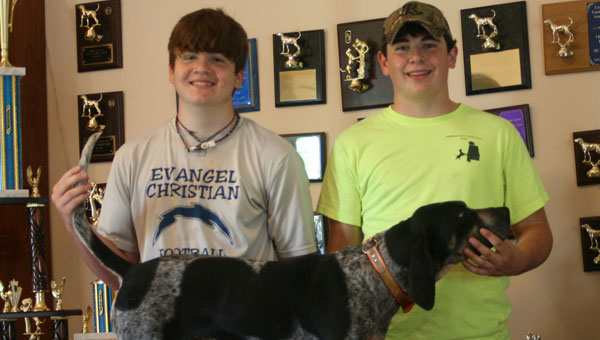 Montevallo’s Byrd family — Lance, Dana, Beaux and Tyler — have enjoyed coon hunting as a competitive sport for more than six years, and they have won many trophies in district and national trials.

Recently, 15-year-old Tyler came away with the largest, a 7-foot trophy for his win of King of the Water title at the Bluetick Days hunt in Holmesville, Ohio.

He and Colby Lucas, son of Gerald and Laurie Ann Lucas of Montevallo, handled Toby, a beautiful Bluetick hound, whose registered name is Mad Dog Psycho Tal to ’Em Toby.

Toby had to swim 400 yards while the coon swam ahead. Toby won when he was the first dog to bark up at the coon as the coon landed at the finish line.

For hundreds of years, coon hunting has been a popular sport in this country, practiced for pleasure or competition, and sometimes for food or to thin over-populated areas.

“I began coon hunting,” said Tyler, “because my parents raised and hunted Blueticks, and I love it because it is a hobby that we all enjoy. On the nights we hunt, we’re away from the TV, electronic games and the computer. We drop the dogs in the woods, sit on the tailgate of the truck, laugh, joke, and listen to the night sounds of the forest while we wait for the baying of the dogs.”

The practice for a pleasure hunt is to load the dogs in the truck, drive to an area known to be populated by coons, drop the dogs and wait for them to send their message that the coons have been spotted.

Each dog has its own tone or pattern of barking when he is on the trail, and another when he trees the coon.

When the hunters agree that they, too, have spotted the coon, they leave it in the tree, leash the dogs, and travel to another drop point to begin another hunt.

To learn more about coon hunting in the local area, contact Dana or Lance Byrd at 665-5732.

By CONNIE NOLEN / Community Columnist “My office is close to your school,” said Bryan Belknap after his screenwriting session... read more