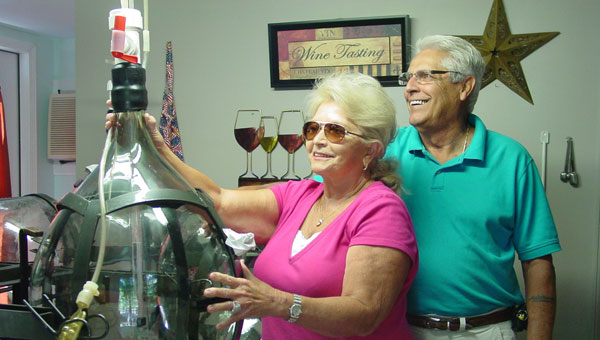 About seven years ago, Bob and Barbara Reynolds moved to Dry Valley where they quickly became a vital part of that community. Folks in the Enon Baptist Church and the neighborhood enjoy their energy, enthusiasm and versatility. They have remodeled their home on Highway 89, cultivated a beautiful vineyard, and just this year put in a garden that deserves to be on the cover of a gardening magazine.

Bob had spent some of his childhood with relatives in Montevallo and then had returned for college and to play baseball at the University of Montevallo.

A few years ago he retired as a major with the Florida Department of Transportation, and Barbara as a federal agent with the Defense Department.

“They are just such caring people,” said their neighbor, Edith Anderson. “The young folks in their Sunday school class look up to them as ‘parents,’ and Barbara helps the seniors with things like trips to the doctors or applying for social security and insurance benefits. Both sing in the choir and work in the Bible school, and Barbara arranges the flowers. I could just go on forever about the good things they do.”

Bob and Barbara were joined in Montevallo by the families of Barbara’s son and her sister. They all help with these many projects and play an important role in the life of the community.

The Reynolds’ 4-acre vineyard is planted in muscadines, scuppernongs and blackberries. Each plant should bear 90 pounds of grapes; some go for the wine Barbara makes for gifts, some for the U-pick in August and the remaining are promised to Vizzini Farms Winery.

Their three-quarter acre garden boasts an unbelievable variety of healthy looking vegetables. A small grant was obtained from Natural Conservation Resources Service for an underground water and fertilizer system; the plants are growing in raised rows with a heavy plastic cover and ample aisles between the rows; all designed for minimum maintenance.

The Reynolds’ plan is for an expanded vineyard and winery with a facility for hosting special occasions.

For more information about the vineyard or the garden, call 665-1585.