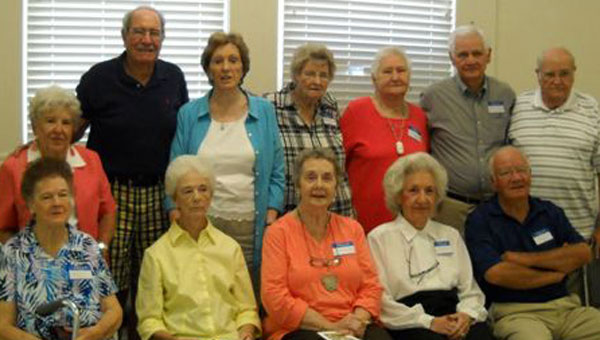 Graduates of the 1952 MHS Class attended the reunion. (contributed)

Three sparkling diamonds adorned the collar of the cute little bulldog pup on the front of the invitations to the Montevallo High School Class of 1952 Diamond Jubilee Celebration. The reunion was held on June 23 at the Mary Lawley Ross Community Center in Pea Ridge.

The classmates and friends were an especially close group and the day was lively with memories — both funny and sad. There were originally 46 in that class who graduated in the lively days of swing music, jitterbug dancing and the Korean War.

Emily Vest Pendleton, the seemingly “forever” class president (as she calls herself), brought everyone up to date on news of those graduates unable to attend and reminded them that this was the 20th reunion. The first was held in 1966. Over the years they were celebrated in various locations and since 2002, in the Pearidge Community Center.

Pendleton had noted in the program: “In thinking back, I remember we were proud of our school, we genuinely liked each other, and we had many opportunities for learning and having fun. We also obviously weren’t thinking too seriously or too carefully when we chose our class ‘symbols’ (Class Song: “I’ll Be Glad When You’re Dead You Rascal You, and Motto: Don’t Do Today What You Can Put off until Tomorrow).”

The group enjoyed a delicious lunch, looking at old posters and pictures, sharing memories, the Alma Mater, and the music of Doug Morris and the Wilson Hill Bluegrass Band.

This class of ’52 holds an annual reunion at 11 a.m. on the fourth Saturday of June at the Pearidge Community Center.