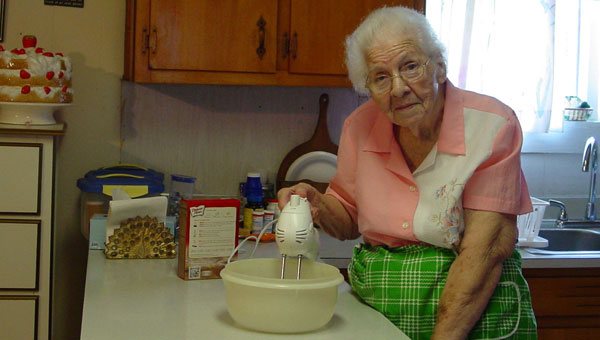 A week or so ago I was welcomed into the sparkling-clean kitchen of Sudie Jarvis of Pea Ridge. Everyone knows “Miss Sudie” for she has lived there for most of her 92 years, and her cheerful personality sparkles as much as her kitchen.

My mission was to steal her recipe for the much-loved coconut cake she makes for the Macedonia church suppers and the Senior Citizen lunches.

“Everyone always wants to know if Miss Sudie brought her cake,” said Lanell Pickett, “and then they fight over the first slice.”

Before we got around to the recipe, Miss Sudie told a little about her life. She was born in Tuscaloosa County, one of 10 children in a farming family.

“We learned to work as youngsters,” she said. “I remember stepping in my brother’s footsteps in the field, and I remember how big I felt as I worked one end of a cross-cut saw.”

She came to Pea Ridge as the 17-year-old bride of Henry “Doc” Jarvis. They raised five fine children and two of them, LaVaughn Jarvis and Carolyn Brantley, still live close by.

Miss Sudie was just a little girl when she made her first biscuits. She laughingly said she kept adding too much flour, then too much milk, then more flour and more milk, until she had a huge bowl of dough creating a joke her family forever teased her about.

Although handicapped by a severe stroke, our lady still cooks some, listens to the radio, loves visitors and goes to church most every Sunday.

We did get around to the recipe, and though she said holding the mixer seven minutes for the icing is the longest seven minutes she’s ever spent, this coconut cake is worth it.

Combine everything except vanilla and coconut and cook in double boiler while beating with mixer seven minutes until it stands in peaks. Add 1 tsp. vanilla. Spread coconut and frosting over layers and sides.