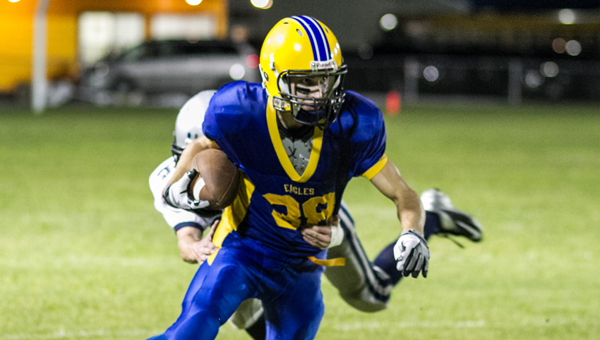 Hope Christian's Charles Streets sprints in for a touchdown during the Eagles' 50-26 win over visiting Lighthouse Christian. (Contributed/Twanna Arnold)

The Hope Christian Eagles crushed visiting Lighthouse Christian 50-26 during the Eagles’ third game of the year on Aug. 31.

“We got an opportunity to play a lot of junior varsity guys,” said Hope head coach Tony Nafe. “Across the board, our team played solidly.

“Jacob Evans played with a lot of heart, and Austin Barnes really impressed me. He may be the future of our junior varsity team,” Nafe said.

Hope jumped out to a quick 16-0 lead by the end of the first quarter, as junior Reid Allen scored on a 13-yard run and Evans added the 2-point conversion.

Charles Streets then reeled in a 40-yard touchdown pass from Allen, followed by a 2-point conversion from Allen.

Timothy Bell started off the second quarter by scoring on a 6-yard run, followed by an Evans 2-point conversion.

Micah Douglas then scored on a 1-yard touchdown run.

After Lighthouse scored shortly before the end of the first half, Hope took a 36-8 lead into the locker room at halftime.

“We took the opportunity to play some of our younger guys, and they came storming back and surprised us,” Nafe said. “They scored two touchdowns without 2-point conversions and one touchdown with a 2-point conversion and brought the game to 36-26. We put our starters back in and were able to rally and bring the score to 50-26.”

Hope is off next week before facing in-town rival Evangel Christian on Sept. 14.