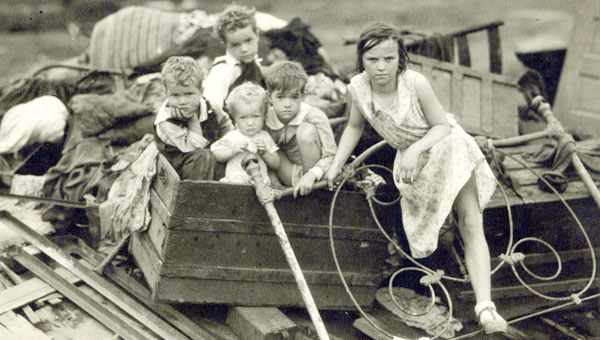 The tornado refugees in this photograph taken on May 5, 1933, are unidentified. They represent, movingly, a scene captured that day by photographers of the Army Air Corps. (contributed)

Eleanor Postell Paty can remember the tornado that struck Helena in May 1933 when she was 13.

“I was crouching in a second story middle room with my brother and sister. My brother told me not to look up, but I did,” Paty said.

That was her last memory until she awoke in a field, holding her brother’s hand. She estimates they were some 25 feet from where their home once stood.

“We were all in our pajamas. My sister escaped without a scratch. We went for help.” Though she did not realize it, Paty had a gash in her cheek that ‘four fingers could be inserted into’ and her hair had been torn out.

“Our home was leveled. The only things we were able to salvage were one chair with no legs, a table and a radio.”

Paty spent three weeks in bed recovering from the shock of the disaster that would end the progress and growth of ‘her Helena hometown’ for years to come.

The Penhale Historic Museum has recently acquired new aerial view photos of the ’33 tornado damage. These were found in a trunk belonging to Cecil Lucas, an Army Air Corps pilot stationed at Maxwell Air Force Base.

A framed, yellowed copy of the San Diego Tribune front page from May 5, 1933, states “the twister lasted but a moment” but destroyed “virtually every building in Helena.”

The Tribune mentions the death of Mrs. N. D. Thomas, wife of the deputy sheriff, whose body was found in a tree yards from their home. Ken Penhale said that home was on Roy Drive.

These photographs show clearly the swath of destruction and Penhale points out the flattened remains of the Masonic lodge — today the museum.

“The R. W. Cobb house and everything on Rolling Mill Street was demolished. You can see my great-grandmother’s house that was blown off its foundation. It skipped my parents’ home, but both the residence in front and behind them were flattened,” Penhale said.

The enlargement of one photo even reveals fresh laundry hanging on the line at the Nunnelly house on Main Street, which is standing, but roofless.