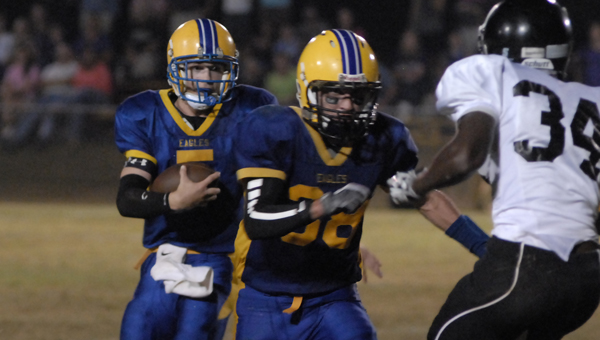 COLUMBIANA – The Hope Christian Eagles had a breakout game in the air throwing for 140 yards and five touchdowns in a 54-0 rout of the Evangel Family Christian Saints at Cornerstone Christian School on Sept. 28.

Hope Christian quarterback Dillon Thompson threw for 110 yards in the first half while completing 5-of-8 of his attempts with four scores.

“We were trying some new things on offense,” said Eagles’ head coach Tony Nafe. “We opened up the pass a little bit and we were pretty successful with that..”

The Eagles (6-0) took the opening possession of the game 66 yards down the field with Thompson capping the drive with his first touchdown pass to Immanuel Drew for a 6-0 lead.

Thompson led his Hope offense on a 53-yard drive later in the first and found Josh Clevenger for a 16-yard touchdown reception to extend the lead to 12-0 at the end of the period.

The Eagles’ offense started off the second quarter with its third touchdown of the game when Thompson connected with Drew for a 16-yard touchdown reception. A two-point conversion extended the Hope lead to 20-0.

The Eagles’ defense forced an Evangel Family Christian and Thompson found Streets in double coverage on Hope Christian’s first play for a 44-yard touchdown and a 34-0 lead.

Hope’s defense made another big play on the next Saint’s possession. The Eagles forced EFC to punt, and Drew returned the kick 60 yards for a touchdown to seal up a 42-0 Hope lead after a two-point conversion at the half.

Eagles’ freshman quarterback Austin Barnes led Hope on two scoring drives in the second half, including an 18-yard touchdown throw to Streets on his first varsity pass attempt.

Evangel Family Christian finished the game with just 66 total yards of offense led by David Munroe. Munroe had a team-high 39 yards rushing with 13 yards on 3-of-12 passing.