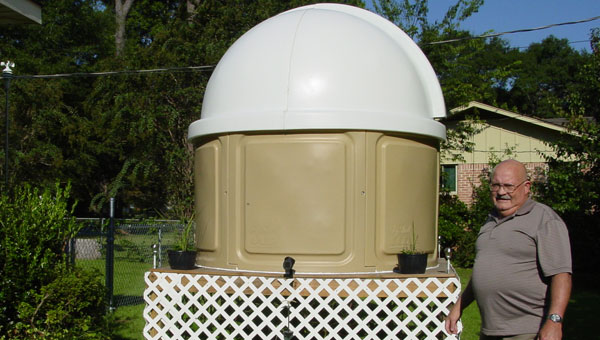 George Corn talks about the merits of his observatory. (Contributed)

Folks driving or walking along Parkway Circle in the Arden subdivision have probably wondered about the dome-topped cylinder in George Corn’s yard. At night the red lights surrounding its middle add to the curiosity and interest.

It only took a short phone call to get a wealth of information and an appointment to see what we now know is a small observatory — a little cousin of the James Wylie Shepherd Observatory on the University of Montevallo campus.

I found George Corn justifiably proud of his acquisition. He explained that he built it with a kit ordered from a company in Canada that makes a really good kit at a price an amateur can afford.

As my host talked about the study of astronomy and showed me the observatory, his eyes lit up. “With this I can see all of the sky; the dome rotates 360 degrees and locks into place,” he said, “and it is weather proof. It’s large enough to accommodate several people and well equipped with an 8-inch diameter telescope, cameras, computer connections, etc. I can see the rings of Saturn, the polar icecaps on Mars, and Jupiter with its four moons; awesome, just beautiful.” He showed a clear photo he made of the moon with its mountains, craters and beds of lava.

George explained he has always loved science, but his special interest in astronomy began when he bought a telescope for his 8-year-old son. They enjoyed many hours together gazing at the stars and George was hooked; he bought bigger and bigger telescopes and spent an increasing amount of time enjoying the study of astronomy.

Montevallo has been home to George and his wife, Arlene, for the past seven years. He works as an electrician at UM and helped build that observatory.

On the day of my visit when he had so enthusiastically described the views of the heavens through the telescope, he declared, “I don’t see how anyone can look at all of this beautiful universe and not believe in God.”

Volunteers take the stand against MS