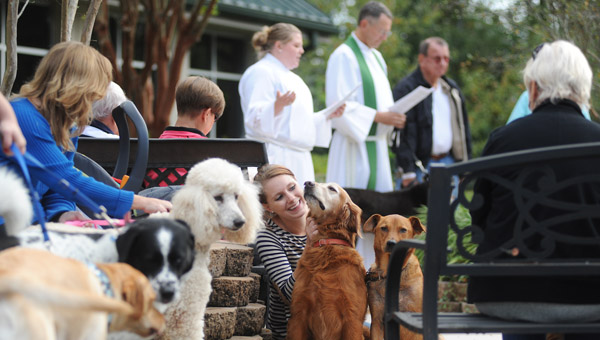 Lizzy Boettner, center, pets Reba and Bella during a blessing of the pets service at Shepherd of the Hills Lutheran Church on Oct. 7. (Reporter Photo/Jon Goering)

NORTH SHELBY – As cars arrived at Shepherd of the Hills Lutheran Church Oct. 7, a different kind of congregation unloaded. Church members and visitors alike led their dogs and carried their array of pets to the front of the church for the annual blessing of the pets service.

During a service consisting of songs, scripture readings and prayer, Kiehl and Miller said blessings over the collection of pets, which included a chinchilla, hermit crabs, frogs, fish, dogs and cats. 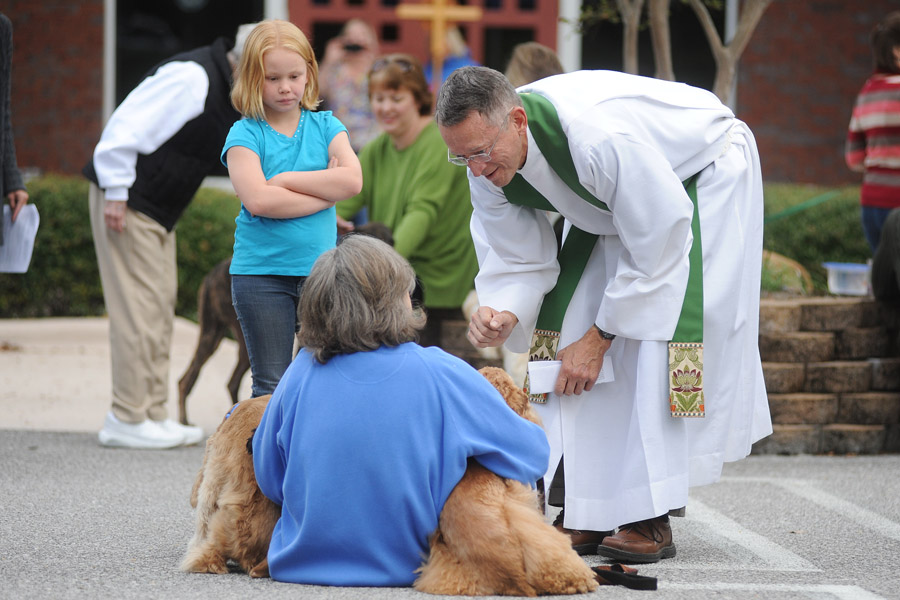 Rev. Darryl Kiehl of Shepherd of the Hills Lutheran Church performs a blessing of the pets service with Doris Chandler and her dogs, Max, Elmo and Pete, on Oct. 7. (Reporter Photo/Jon Goering)

“May you and your family find joy together in the life you live together,” Kiehl said as he placed his hand on the head of a family’s dog.

The church also collected monetary and item donations for the Shelby Humane Society.

“Part of this is that animals are so important to people,” Kiehl said of the service. “They’re really a gift, a gift from God – a blessing.”

Kiehl said he has blessed everything from turtles to iguanas.

“I’m waiting for someone to bring a horse or something,” he said, laughing.

Alexandria Erickson, 10, brought her goldfish, Goldie, for a blessing.

“I love her and want to have her blessed,” Erickson said.

Erickson’s younger brother, Zachary, who said he was “5-and-a-half years old,” brought his frog, Spiderman, and Taco Cheese, his Beta fish, for a blessing. 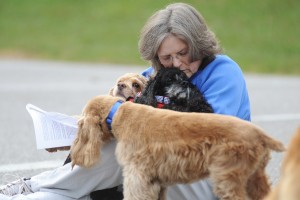 Doris Chandler cuddles with her dogs, Max, Elmo and Pete during a blessing of the pets service at Shepherd of the Hills Lutheran Church on Oct. 7. (Reporter Photo/Jon Goering)

Dave and Sue Collins and their children brought a dog, chinchilla and hermit crabs. The family has attended Shepherd of the Hills for about 11 years.

“I love that the pets also get a blessing,” Sue Collins said.

Brenda Nola, a North Shelby resident, said she and her husband typically attend the blessing of the pets service at other local Catholic or Episcopal churches, but saw the sign at Shepherd of the Hills advertising the service and decided to attend this year.

Nola, who brought her poodle, Ike, lit a candle in memory of another poodle, Patton, which she had lost after 18 years.

“They’re God’s creatures too, and they’re so special to us,” Nola said.

Calera picks up third shutout of the season

By MICKEL PONTHIEUX / Sports Reporter CARBON HILL – The Calera Eagles shutout their third opponent of the season in... read more