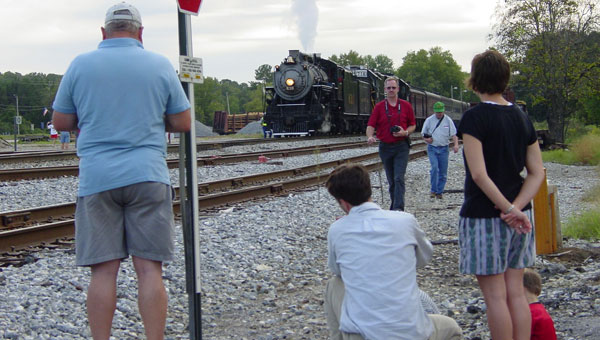 Many Montevallo area train enthusiasts joined the 21st Century Steam Excursion recently for an excitement-filled day traveling in beautifully restored passenger cars powered by a steam engine. They followed the historic rail lines between the terminal station in Birmingham and Wilton.

The excursion was sponsored by the Tennessee Valley Railroad Museum and Norfolk Southern Railway.

At the head of the train was the former Southern Railway 630, 2-8-0 engine that was originally built in 1904, and later restored by the museum. All of the passenger cars were at least 60 years old, now restored, owned and maintained by TVRM.

The passengers rode over the former Brierfield, Blocton & Birmingham Railway line built in 1891, which became part of Southern in 1894. It is still known to railroad employees as the 3-B line.

The route carried them through such railroad landmarks as the 14th Street Tower, Bessemer, Burstall, Gurnee Junction and Lacey. Wilton was the destination point where the train was turned on the “wye” for the return trip to Birmingham.

All along the track people gathered to wave at the passengers who happily returned the greetings. Large groups waited at Wilton, and at all of the crossings, to make pictures of the historic train, and to record what many think of as the “sweet sound of the steam train whistle.”

“We enjoyed the excursion so much,” said Ann Snow. “It brought back many memories; trains have played a big role in my life as my dad was a railroad conductor. I remember the steam trains stopping for water at the Wilton water tower just across from our home there. We met a lot of other train buffs on the trip, and had great fun sharing our knowledge of the history of the railroad.”

For information about the Tennessee Valley Railroad Museum, visit Tvrail.com or 21stcenturysteam.com.