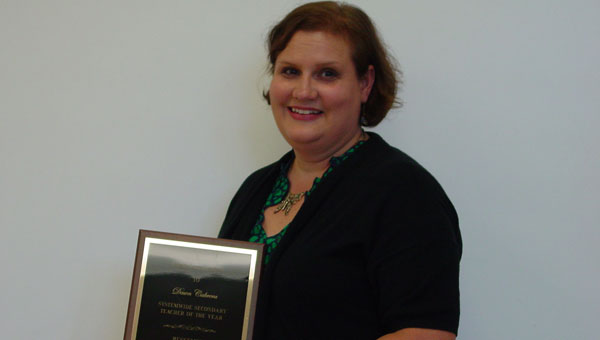 Dawn Cabrera has been named Montevallo High School Teacher of the Year. (Contributed)

Dawn Cabrera was recently chosen by her peers as Montevallo High School’s Teacher of the Year.

A look at Cabrera’s record and current schedule made her an obvious choice. She teaches all levels of the math honor classes of algebra and calculus. Her extra-curricular activities include her position as auxiliary sponsor of dance, color guard and majorettes. She also works with the 30 members of the very active Future Teachers of Alabama.

In addition to the full workload at MHS, this energetic lady teaches a class at Jefferson State Community College, and is a distance learning instructor at the University of Alabama.

“Dawn is an extremely dedicated teacher,” said Anita Glover, MHS librarian. “She not only cares that her students succeed in math, but also in life. She works tirelessly in the school, her church, and with community groups such as the Girl Scouts.”

When Cabrera was asked how she chose math as her teaching area, she explained that she had originally thought she would teach third grade, but was advised that her job choices would be greater with high school math. From her smile it was evident that she was happy with the decision she had made.

“I can’t imagine doing anything else,” Cabrera said. “Teaching is God’s gift. He put me here and gave me this job; I can’t let him down.”

Cabrera was reared in Tennessee, earned her B.S. at Middle Tennessee State and her M.A. at the University of Alabama in Birmingham.

She and her family live in Maylene. Her husband is a retired Sergeant Major, who now works for the Army at Fort Jackson. Their two daughters are in college.