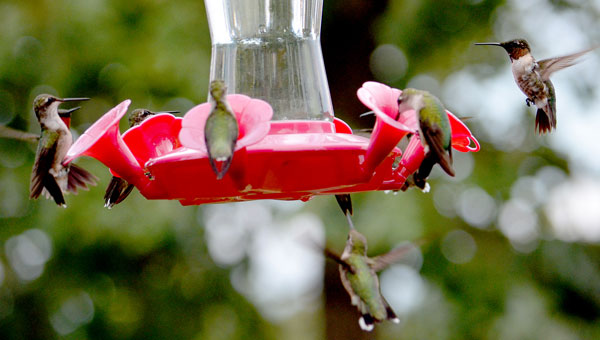 Hummingbirds come in droves to feeders at the Jones’ home in Helena. (Contributed)

On the deck of their upper-level sunroom, Gene and Cindi Jones are visited by a post-Labor Day mass of migrating hummingbirds — sometimes 60 to 100 tiny buzzing creatures in the late afternoons — flitting to and from the feeders and jostling one other for nectar.

“They are also fond of our Shoal Creek Vitex tree and the purple fan flower,” said Cindi, who makes her own nectar for the feeders.

The preparation of homemade hummingbird nectar is simple. Completely dissolve one part granulated sugar in four parts hot or boiling water. Allow the solution to cool before refilling feeders. Do not use honey in your feeders, as it can kill your birds.

Cindi, owner of Savvy Shoestring Interiors, has turned her designer eye to their yard as well as their interior. It doesn’t hurt that Gene is able to wield a shovel and hammer and that he has, too, a well-developed sense of placement for the architectural landscape.

Gene built the waterfall and Koi pool. Cindi has used her favorite plants — hydrangeas, daylilies and iris — liberally in the beds surrounding the home.

“We don’t fish or golf. This is where we spend our time,” the Joneses said, adding they are easily mesmerized during hummingbird migration time from late afternoon until dusk, when the birds retreat to adjacent trees and slip into their resting state of torpor.

Cindi has grown so attuned to the distinctive sound of the ruby-throated hummingbird, that she even noted a distinctive and different tone and a brown color on one bird at her feeder.

“It was possibly a rufus hummingbird, which is a much less common species that does come through this area. Its throat is more orangey than ruby.”

“I have red salvia planted in a pot right next to the kitchen bay window and the hummingbirds come up to feed there. I have been trying to get the hummingbird photos, but they are more patient than I am,” Peggy Holly said.

There is no evidence that hummingbirds need any nutrients other than pure, white table sugar, though insects also make up a small portion of their diet.

Hunting for buried treasure in Helena