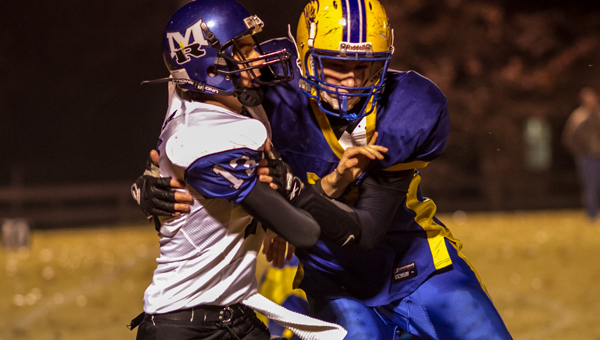 Hope Christian's Josh Clevenger makes a tackle on Macon Road's Josh Talley in the Eagles' 42-20 victory in the first round of the NACA tournament on Nov. 7. (Contributed/Twanna Arnold)

“That was the most complete game we’ve played all year,” said Eagles’ head coach Tony Nafe. “We had to reevaluate after the loss to Evangel and this was a chance for redemption.”

The Eagles (10-1) will take on Community Christian in the NACA championship game on Nov. 9.

The Eagles trailed 8-0 after the first period, but quickly responded in the second quarter. Charles Streets started the scoring with a 22-yard touchdown run and Reid Allen added a 10-yard run for a score for a 14-12 Macon Road lead at the half.

Streets scored his second touchdown of the game in the third quarter on a 14-yard run. Jacob Evans added the two-point conversion for the Eagles’ first lead of the game, 20-14.

Thompson threw his second touchdown pass of the night to Josh Clevenger on an 18-yard completion for a 42-14 Eagles’ lead in the fourth.

Macon Road added a big play for a score, but it wasn’t enough as they fell to the Eagles, 42-20.

The Eagles handed Macon Road their first loss of the season and avenged a 22-6 loss to Macon Road in the first round of the 2011 NACA tournament.

Thompson threw for 73 yards and three touchdowns along with 144 yards on the ground. Streets finished the game with six catches for 169 yards and a touchdown while rushing for 88 yards and two scores. Evans finished with 129 yards rushing.

Senior Andrew Whitson led the Eagles’ defense with nine tackles including a sack.

Evangel Christian's Andrew Thompson led the Lightning with 122 yards passing and a touchdown in their 51-14 loss at the... read more