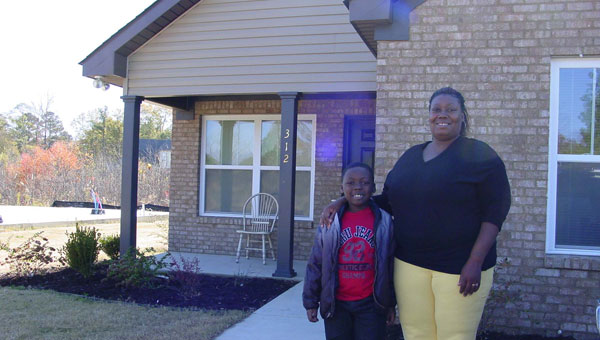 Tilwana Conwell and her son, JaQuon, talk of celebrating the holidays in their new Habitat home. (Contributed)

She came to them several years ago with a request, not only for immediate assistance, but for help getting her life on track so that she could provide a better life for herself and her two children.

During the ensuing years, Tilwana did receive occasional emergency assistance, but more importantly, she has done everything the SEA staff advised, in addition to working as a crew trainer at McDonald’s.

“She has always been a hard worker, and eager to learn,” said SEA Director Karen Pendleton.” “She was excited about attending our budgeting sessions and learning how to better manage the family’s income. Then, she decided to pursue getting her GED, so she has been working with volunteers Ruth Robertson and Nancy Sanders, and hopes to get her GED in December.”

A lifelong dream of this deserving lady was that of owning her own home, and that dream was realized recently when she and her children, JaQuon and Demetrouse, moved into their brand new Calera home built by Habitat for Humanity.

The SEA staff had guided her through the process of the application and referred her to an agency that helped clear some financial issues.

Tilwana credits much of her success to her faith in God and to the three routines she follows every day: She reads her Bible, she finds the time to really talk with each of her boys, and she reads a motivational book.

“I feel so blessed,” said Tilwana, “I never thought I would really be a homeowner. So many helped me — SEA, Gateway Consumer Credit Counseling, and Assets to Independence. All of them are United Way agencies.”

From SEA’s newsletter: “People who come to SEA are often frustrated about their life’s circumstances and are at the end of their rope.

“There is hope, and Tilwana is a shining example that things can be better with a little help and a lot of hard work.”

For information regarding making a holiday contribution to SEA, call 665-1942.