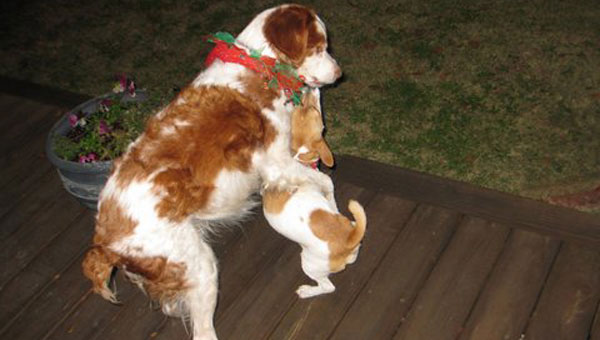 It was a great party where friends and neighbors of both species visited with each other and enjoyed doggie treats and holiday food. The afternoon was chilly, but the hot apple cider warmed the body and the spirit.

Major was dressed in red pajamas, and the visiting pups were all dressed out in red scarves with bells attached

All of the Baggetts were there with Pork Chop, a sweet little dachshund. Precious, Elaine Booth’s small pup, was a little awed by all the bigger dogs, and wouldn’t stray from Elaine’s shoulder. Lisa Thomas brought her well-behaved golden retriever, Cooper, and Rachael Mathinsen came with two golden retrievers, Cooper and Gracie.

Two new pets made their debut at the party: Gibson is a pretty shepherd-mix recently adopted by Doris Lien, and Bill and Catherine Legg’s new family member is the mischievous Boston terrier, Albert.

Several people came without their dogs to take care of them (let it be noted here that they did behave very well in spite of that). There were Faye and George Roberts, Ruth and Ed Robertson, Carol Lightfoot, Elizabeth Thrower, Amy Fager, Kelly Wacker, and Judy Santa Cruz. Visitors from the far-away United Kingdom were Nicola, Robin and Jeanie Stolworth.

“At the party six years ago,” said Carolyn, “when Major was only 10 years old, he led his friends in a game of ‘follow the leader’ as he jumped the fence, but this year Major is almost 16, and not so adventurous. With a wagging tail he greeted his puppy-friends, but while the party was still in full swing he just went in the house to bed. He’d had enough fun for one day.”

In spite of that, everyone thinks Major is looking forward to next year’s party.

By DALE BRAKHAGE / Community Columnist For 20 years, the generosity of Indian Springs villagers has spread Christmas joy to... read more