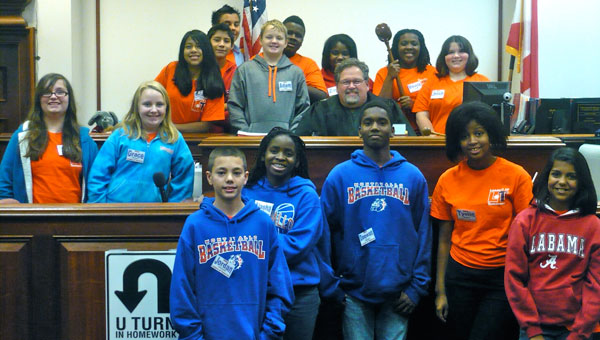 Dec. 10, 2012, was an exciting day for 15 Montevallo Middle School Leaders of Tomorrow.

Theresa Pritchett, chair of the LOT board, and their teacher-advisor Vinny Chiaramonte accompanied the students.

Their first stop was the sheriff’s office where Curry talked with them about how he came to be the county’s top legal enforcement officer, about his roles and responsibilities and those of his employees.

He impressed upon them the importance of staying in school and getting further training in college or in a marketable skill.

He also stressed the importance of good decisions and pursuing their dreams.

Next on the day’s agenda was a tour of the juvenile detention center.

The LOT students were impressed, to say the least, with the process to which incoming offenders are subject: The holding cells, the shower where a strip search and de-licing occur, the solitary cells and the special clothing and sandals the young inmates must wear.

Miller related many sad stories of the offenders and the effects their actions have upon their families and friends.

He, and three carefully selected inmates, stressed the consequences of following the crowd, making poor decisions and learning from their mistakes.

After lunch, the LOT students went to the courthouse where they toured three of the courtrooms.

“Judge Kramer spent close to an hour with them, talked generally about the juvenile court system, his career path, and why he likes juvenile court,” said Pritchett. “He was very patient with them and answered their questions as honestly and accurately as he could.”

The LOT students were greatly impressed with the fact that in all of these important county government offices, they were treated with the respect and dignity of adults.

The LOT program is in its 13th year of building high quality leaders.

The program is operated and financed through the cooperative efforts of a board made up of community and civic leaders as well as members of the MMS faculty and staff.

With your help, the Red Cross can save more…