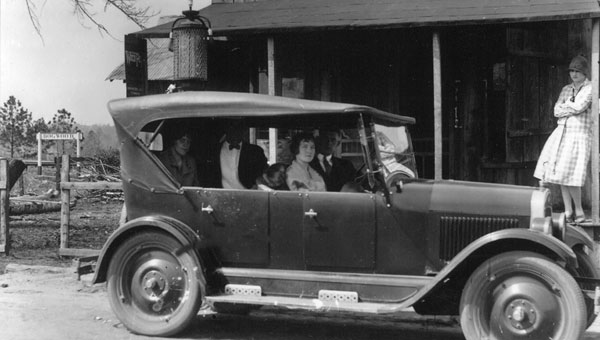 This early 1900s picture of Dogwood from the Aldrich Coal Mine Museum Collection shows a sign on left, store building, gas pump, car of that time and unidentified occupants. (contributed)

To learn about community life in the coal mining town of Dogwood, I went to Mary Hall and Howard Lucas who both grew up there in the 1930s – 1940s.

In those days the community was segregated: Black and white families lived in distinctly separate areas. Some of the areas were called Export, Number Two, Tater Patch and Silk Stocking Row. Houses owned by Little Gem Coal Mining Company were allotted to workers and their families according to their jobs. For example, the superintendent lived in a better house than an ordinary miner.

Fresh water was pumped to an outside faucet for most houses, and there was an “outhouse” in the back yard that was cleaned weekly by “Charlie,” a friendly man much loved by the children of the community.

Most of the families had chickens, pigs, a cow and garden in their back yards. Hog killing was a big event and drew many spectators. The boys begged for the hog bladder to be inflated to use as a football.

For the white children, there was the small school building on Highway 22 built by the mining company for grades one through six. The black children went to school in a local church and later to Columbiana.

A vital part of the miner’s life was the company commissary,” said Howard. “There they sold groceries, hardware and clothing. Purchases could be charged against their wages. Also, the notorious “clacker” was available and could be traded for cash, but usually discounted from 10 to 30 percent.”

“Pinkie” Lawley, Mary’s dad, had a barber shop in Dogwood and there were three stores in the adjacent Underwood; two with gasoline service. Mrs. Kirkley’s store was the largest and the post office was there.

Some of the churches were the Dogwood Grove Baptist, the Missionary Baptist, the Assembly of God, the United Methodist and the Underwood Baptist Church.

Children enjoyed games at the mine team’s baseball field, and swimming in the creek.

Both Mary and Howard remember the happy days of their childhood, and, with much affection, the strong kinship of the Dogwood families that has endured for generations.

By BETH CHAPMAN / Community Columnist Columbiana attorney Conrad Fowler knows a great deal about leadership, much of which he... read more